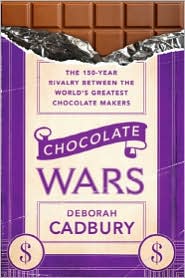 With history and heritage on her side, Deborah Cadbury, a relative in the famous chocolate empire,  offers the Cadbury family version of the history of chocolate. Written just as Kraft has made the famous independent Quaker family business one of their subsidiaries, Chocolate Wars offers not only historic perspective but also a plea for the future of Cadbury’s reputation.

The first few chapters go back to England, the Quaker tradition, the near failure of the business, and the ingenuity of the Cadbury brothers’ investment in the Dutch process that saved them from annihilation and made them competitive with the French and other well-established English companies.  Their creativity in using advertising and packaging of their “pure cocoa” –  against the Quaker tradition, as well as the conventional business practices of the day – added to establishing Cadbury as a name in chocolate.

The author begins her tale of subterfuge as far back as 1870 with Joseph Rowntree, a fellow Quaker , who “even as he was engaged in …espionage of {Cadbury} his Quaker competitors… {he was} suggest(ing) that they collaborate”  against foreign competition – Lindt, Tobler, Nestlé, who were inventing new ways to manufacture a better tasting chocolate, and Hershey and Ghirardelli who were in the American mix.  Rowntree and his successors, creator of the still popular Chocolate Crisp (known in the U.S. as KitKat), continue to reappear in the narrative as fortunes rise and fall.

Although sprinkled with the philanthropy and good deeds of the Cadbury family, as well as extensive explanations of their Quaker and business background, the book has a somewhat one-sided, but still fascinating appraisal of how the chocolate industry, flourished and became what it is today.  At the same time, Cadbury seems intent on exonerating any lingering blemishes on the family name that few would even know about without her book.

If the book had been written by Hershey or one of the other chocolate barons, most of the historic facts would be similar, but the political innuendos might be a little different.  It’s hard not to detect a note of jealousy for Hershey’s seemingly unchallenged success in America – until Frank Mars came along with the Milky Way.  The rivals became partners and Cadbury reveals the mystery behind M&M, named for Murrie (president of the Hershey Company) and Mars.

“The war (World War II) reshaped the chocolate business, randomly creating winners and losers depending on accidents of geography or birth.  One winner was Forrest Mars.”

Cadbury does not try to hide her contempt for Mars – “money was the new religion” – as she follows his attempted takeover of Hershey, which survived.  Her

real target is the Kraft takeover of the Cadbury company in 2010.  After years of struggle and growth, the company was no longer a family-run Quaker business but in the business of making money for its shareholders, and Cadbury assures her readers that the chocolate business is on its way downhill.

“ A week after closing the deal, Kraft confirmed the closure of the famous Cadbury factory at Somerdale…four hundred jobs had to go…The danger is that people no longer see the reason for giving of their best…the opposite of what George Cadbury tried to achieve…”

Cadbury ends with a caution – smaller firms have disappeared into two giant corporations –Nestlé and Kraft, resulting in “excessive pay, bonuses, and pensions for those in the upper echelons…with a growing gap between rich and poor.”   And our greed for more and cheaper confections is leading to “ an obesity epidemic.”

Sour grapes or too much chocolate?  Chocolate Wars is an easy-to-read and somewhat biased documentary that offers an uneasy omen for small business.  Other than the revelations about the story behind a few of the names, the taste is bittersweet – more fun to ride through the Hershey chocolate factory or just enjoy the chocolate while you still can.

It is the season to eat some of those delicious Cadbury eggs.  My favorite is the Flake.