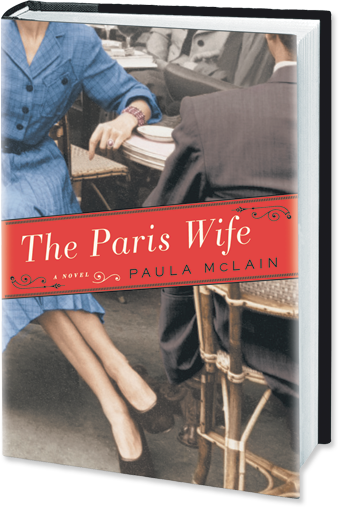 Romance, history, focused dialogue, clear intent – all Hemingway.  I’m reading and savoring Paula McClain’s The Paris Wife, pretending I am back in the 1920’s Paris of Gertrude Stein and Ezra Pound – with the beauty of that city and the intellectual zest of its expatriate writers.  McClain writes as though she were inside the writer’s head, as he begins his journey into greatness, but from the perspective of Hadley, his older first wife.

Mirroring Hemingway’s style, McClain “lets the action speak for itself” with glimpses into the war experiences that haunted him, the family background that irritated him, the obsession with writing and the ultimate fear of any writer – that he will lose the thought at any moment.

When Hemingway’s manuscripts are stolen from Hadley on the train, it may have been the beginning of the end.  Then, she is pregnant, and the wonder is that they survived his returning to dead-end newspaper work in Toronto, but it’s the bohemian elitist life and infidelity that ends the magic.  In McClain’s portrayal, Hemingway is the cool, talented, tortured genius – entitled to loutish behavior.

Although this is a fictionalized account told by Hadley, it’s hard not to imagine being in the bedroom, overhearing their conversations; at the racetrack at Auteuil, when their horse falls; or at the running of the bulls, as a pregnant Hadley rediscovers her inner strength.  Of course, knowing that Hemingway had four wives precludes a happy ending, but, as I keep reading,  it’s hard not to hope for one.  When I finish, I plan to reread the book he dedicated to Hadley – The Sun Also Rises – hoping to see Hemingway with a fresh perspective.  McClain chronicled their lives, using letters and primary sources in her research, and, of course, Hemingway’s own accounting of his life at that time in Moveable Feast.

As I sat in a coffee shop, checking email, forgetting to turn the book over to hide its cover, an elderly man, seeing the title, asked me if the book was any good.

“Better than anything,” I said, but I should have told him it was really a sad but romantic love story.