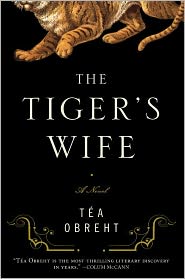 I have been reading this book for over a week now – not consistently, which is a problem.  I forget and need to backtrack each time I pick it up.  It’s not that the book is not compelling – it is hypnotizing, as Obreht weaves a story around the unrest in the Balkans and a generational tale of a doctor and his grandaughter, Natalia, in The Tiger’s Wife.  But, I am finding it hard to concentrate, knowing there is an underlying message I am missing.

The story is sprinkled with fables, with Kipling’s The Jungle Book at the core, a favorite book Natalia’s grandfather always carried with him, and often read to his granddaughter. Clearly, the tales of the tiger carry a meaning beyond the obvious, but the telling lulls me into the childlike comfort of having someone read a story to me – before the action returns to the grim reality of poverty and a war-torn country.

Obreht opens with the news of the death of Natalia’s grandfather far from home, as Natalia, a doctor herself, is on her way to inoculate a village of orphans in a remote area. Natalia has known that her grandfather was ill and his sudden decision to travel seems strange.  When his body is returned, his belongings are missing, even The Jungle Book.

As Natalia makes a sidetrip to recover his things, she remembers his stories about the tiger, and the many visits to the zoo they made when she was a young girl.  She recalls her rebellious teenage years, and a time, after the zoo was destroyed, when she and her grandfather saw an elephant roaming the war-ravaged streets, and her grandfather’s admonition to keep the sighting a secret.

When Natalia remembers her grandfather’s stories, she sees them again as fantasy, and it would be easy to fall into that deception, but Obreht slowly uncovers pieces of the stories, and inserts notes of suspicion and political unrest as a reminder of where this story is taking place and what has happened.

I need to finish, but the reality and horror of Obreht’s message is seeping in, and it’s hard to take in all at once.  I’ll just take my time.

Has anyone else read the book?

2 thoughts on “The Tiger’s Wife”