“Censorship ends in logical completeness when nobody is

allowed to read any books except the books that nobody reads.”     George Bernard Shaw

The police tape surrounding a book display in my local library was effective; it drew me right to those banned books.  The American Library Association is sponsoring Banned Books Week from September 25th through October 1st, and encouraging everyone to read a book that has been challenged or banned somewhere.  Not hard to do – you’ve probably already read a few – Shakespeare has been banned, along with Mark Twain’s books.

The librarian had a list of some of the challenged books in my library system. (According to the ALA, a challenge is an attempt to remove materials, based upon the objections of a person or group.  A banning is the removal of those materials.  Challenges do not simply involve a person expressing a point of view; rather, they are an attempt to remove material from the curriculum or library, thereby restricting the access of others – most challenges are unsuccessful and most materials are retained in the school curriculum or library collection.)

All these challenged books are still on my library’s shelves: 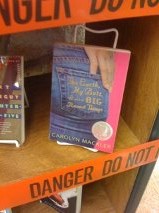 I picked out a young adult book that has been banned elsewhere and challenged here – The Earth, My Butt, and Other Round Things – the title appealed to me.

The ALA has a list of the top ten books by year at  ALA List of Banned Books.    How many have you read?