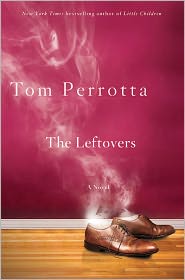 The sky is falling; the end of the world is coming – and some know exactly when that will be.  Remember the Rapture warning for May 21st?  Are you still here?  No wonder; Harold Camping revised his prediction for October 21st, and if you miss that, there’s always 2012 looming from the Aztecs.  In The Leftovers, Tom Perrotta makes the prediction come true, but not exactly as the doomsayers envisioned.

Thousands of people mysteriously disappear on a designated day in Perrotta’s tale, but they are not the blessed or even necessarily following a religion – although Perrotta humorously notes a few celebrities who made the cut and were whisked off the planet, including Jennifer Lopez, Shaq, Adam Sandler, and Greta van Susteren (Nancy Grace was left behind to dance).  The rest were flawed, as noted in a caustic new publication, a newsletter chronicling the chosen, written by a former minister who is just a little annoyed at being left behind.

Some leftover losers, having difficulty coping with the abandonment, create a cult

group called the Guilty Remnant, with rules that require – besides leaving family and friends, and donating money  – dressing all in white, taking a vow of silence, and smoking cigarettes.  Others follow Holy Wayne, a self-proclaimed evangelist with a penchant for teenage wives – as many as he can get.  But most survivors “… just put on blinders and {go} about their trivial business…as if they expected the world to last forever.”  In a nod to 9/11, Perrotta notes that the pseudo-rapture has some of the same effects – the economy failing, the stock market crashing, memorials erected, fear of future attacks.

Perrotta frames the story around one leftover family: Kevin, the mayor of Mapleton, a suburban “Our Town”; his wife, Laurie, who has joined the Guilty Remnant; their son, Tom, who has dropped out of college to join the Holy Wayne movement.  Jill, the daughter, whose friend vanished that fateful afternoon when they were watching TV, shaved her head and morphed from straight A high school student into a rebellious slacker.  The family is the model for all the leftovers – no one has remained unchanged; each has to find a way to cope.

What seems like a clever premise, with possibilities for cynical humor, becomes a depressing commentary on loss and the reality that no one is going to outlive this life. The question becomes what to do with the time left.  Perrotta’s characters seem to lean toward the negative – except for Kevin, who seems to be in a state of upbeat denial – finding players for his softball team, sponsoring parades and town dances, and starting a new relationship with Nora, whose entire family – husband and small children disappeared into the ether.

The narrative is hard to follow at first, until you realize the rhythm of Perrotta’s bouncing around each of the family member’s new lives.  After a while, the disappearance of the chosen ones becomes secondary to the survival of those left behind. Perrotta offers some suspense, so you might keep reading just to see how it all works out.  Not to worry, the ending has the characters being true to their good natures – with even a sympathetic element of hope for humanity.