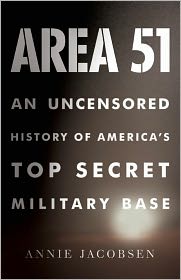 Do you believe that aliens and spaceships are housed in an isolated area a short plane ride from Las Vegas?  Are those commuter 737s that leave McCarran airport at night ferrying scientists and engineers to a secret operation that started with the Manhattan Project?  Using reliable sources, Anne Jacobsen reveals the reality behind the rumors in Area 51 – An Uncensored History of America’s Top Secret Military Base.

From Robert Lazar’s strange defection, telling the world about little gray men and flying saucers, to declassified information that uncovered the high altitude spy planes like

the infamous U-2, Jacobsen converts nonfiction into a narrative that is as gripping as reading science fiction  – unfortunately, it’s not fiction – it’s true.  Read about secret ops, Cold War history, atomic bomb testing, robotic insect spies.  But the crash at Roswell may be the final tease.  What were those remains that were found – aliens from another planet or Russian experiments?

With more than a revelation of the sensationalism and covert operations, Jacobsen personalizes the account with those real people who made it all happen – from Lockhead engineers to pilots and politicians.  Almost like watching a spy movie, the book moves fast with events and surprises as well as information.

You’ll wonder what else they are hiding.