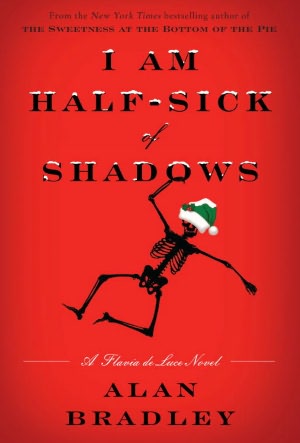 Flavia de Luce is back.  The most recent in the series of crime adventures solved by Alan Bradley’s  precocious British detective – I Am Half-Sick of Shadows – opens with Flavia dreaming of ice skating down the corridors of a deserted portrait gallery.  She could hose down the halls in the cold drafty East Wing of Buckshaw, the Victorian mansion where her family has lived for centuries, for her makeshift indoor ice rink.

Christmas is coming, and Flavia has created a plan with her chemistry set to prove that Santa really exists.  Her father has rented out parts of the old house to a film company to generate some income.  A blizzard traps most of the village residents overnight at Buckshaw after a special benefit performance, and  the star is found – by Flavia, of course – strangled by a length of film around her neck.  Everyone is a suspect.

If you haven’t read the first two books in the series, feel free to dive into this one anyway.  Bradley will bring you up to speed quickly, and you can enjoy the Christmas flavor while Flavia uses her wits to help Inspector Hewitt solve the crime and catch the murderer – but Father Christmas eludes her.  The mystery is fun, and Flavia is in good form again.