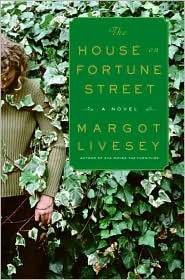 Four lives intersect with secrets and betrayals in Margot Livesey’s The House on Fortune Street.  Each character has an affinity to a literary master – Keats, Dickens, Lewis Carroll, and Charlotte Bronte.   Their modern lives from London to Brooklyn, carry the weight of these authors’  flaws and the influence of their lives and work.

Livesey divides the book into four parts, with each character taking turns as the narrator: Abigail, the owner of the house and a young amoral actress and playwright whose childhood as a virtual orphan has trained her to fend for herself; Dara, Abigail’s friend from college days at St. Andrews, who taught her civility and loyalty; Cameron, Dara’s father who left when Dara was ten years old to protect her from his horrible secret; and Sean, the all-but-dissertation candidate at Oxford, who abandons his wife and his research on Keats to write a book on euthanasia when Abigail decides to charge him rent for living with her.

Sean quotes Keats and imagines parallels to his own life; Abigail’s early days mirror Dickens’s “boyslaughter” life – when part of his childhood was destroyed by the irresponsibility of his parents; Cameron, an avid photographer of young girls, sees himself in Lewis Carroll’s famous pictures of Alice; and Dara becomes a Jane Eyre, betrayed and vulnerable – but not as strong as Bronte’s literary heroine.

Each section ends with a cliffhanger, but the fortunes of all in the house come together in the end – tragically.  Not an uplifting tale, but Livesey’s language is witty and compelling and her literary allusions informative.  I found this author when I read her children’s book, The Flight of Gemma Harding, with lives similarly influenced by circumstances and just plain luck.

2 thoughts on “The House on Fortune Street”