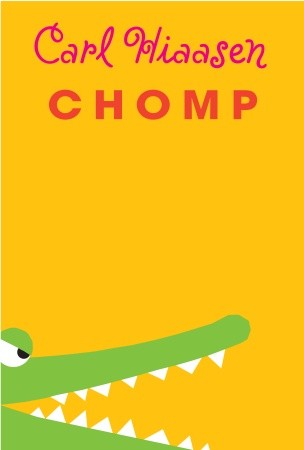 If you are still alive after being bitten by a turtle, swamped by an alligator, and infected by a bat – can you call yourself a survivor?  In his fourth book for younger audiences –Chomp – Carl Hiaasen uses his irreverent comedy in his favorite Florida setting to have some fun with arrogant reality show hosts while delivering a campy tale of a young boy’s defining moments in growing up.

Derek Badger (real name – Lee Bluepenny) is the star of a reality television show that has stunt men performing his harrowing escapades, while he secretly eats eclairs out of  camera view. Mickey Cray and his son Wahoo (just like the fish) are hired as animal wranglers to provide alligators, snakes, and snapping turtles from their trained cadre to simulate the wilds of the Everglades for a show.  Hiaasen offers laugh out loud experiences that have the television star showing off his ineptitude with Alice, the chomping alligator and other assorted wildlife.

When Tuna (yes, another fish), a young girl and classmate of Wahoo, runs away from her abusive father to join the Crays on location, the action takes a serious turn – especially when Tuna’s father shows up with a gun.  The wild chase scenes with shootings, mosquitoes, and poison ivy create suspense, but the laughs are never far off.

Although Hiaasen targets a young audience for this weird tale, adults will catch the allusions and laugh louder.

2 thoughts on “Chomp by Carl Hiaasen”