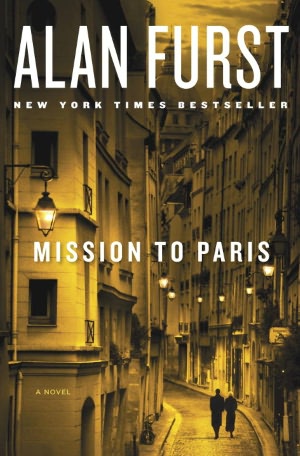 World War II is brewing in 1933, Hitler is intimidating the Parisians while misleading Chamberlain, and a Hollywood actor born in Vienna is an enticing tool for both sides in Alan Furst’s Mission to Paris.

The plot stumbles along slowly as screen star Fredric Stahl gets comfortable in Paris and begins work on his new war movie.  Stahl naively underestimates the political power of the German forces around him, and prefers to think of the Paris of his youth.  He’s accidentally assaulted in a street protest, and is threatened by a German Nazi officer who breaks into his Paris hotel, but the action is more insidious than outright lethal.

Stahl is easy to like despite his tedious innocent-abroad persona.  He is as comfortable drinking beer in a backdoor saloon as he is sipping champagne at a society soirée.  As he acquires a political conscience, strong women add to the intrigue: svelte Russian actress and superspy Olga Orlova, Nazi sympathizer and society hostess Baroness von Reschke, socialite and lover Kiki, and demure seamstress and Polish political exile Renate Steiner.

After witnessing the infamous Kristallnacht, halfway through the book, Stahl finally becomes the undercover agent you’ve been waiting for, and the action escalates into spy thriller mode.   Stahl successfully passes on war secrets while undercover as the movie star under the direction of a wry American embassy official.  When the cast and crew relocate to Hungary to shoot a scene in a castle, the danger of passing through Germany changes his fate.  A finale includes a romantic getaway with assassins in hot pursuit.

Although this is Furst’s twelfth spy thriller, it is my first encounter with his historical espionage tales, often compared to those of John le Carré – an intelligent blend of history and drama with enough suspense to keep you turning pages.  Through Furst’s characters, the fear of pre-war Paris seemed real; not even a famous Hollywood actor could escape the terrorizing hammer of the Nazis.

The novel ends in 1939, a year before France was attacked by Germany “on 10 May, 1943, and surrendered on 21 June”  – and three years before the July, 1942 Vel’ d’Hiv’ Paris roundup of Jews used by Tatania de Rosnay in Sarah’s Key (targeted for discussion soon by one of my book groups).  Furst provides the historical foundation for that event in Mission to Paris by clearly addressing the French complicity with the Nazis.