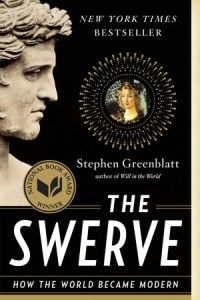 How could a book change civilization? Many authors could only hope to have the effect described in Stephen Greenblatt’s award-winning documentation of The Swerve.

“The finding of a book does not ordinarily figure as a thrilling event, but behind that one moment was the arrest and imprisonment of a pope, the burning of heretics, and a great culturewide explosion of interest in pagan antiquity. The act of discovery fulfilled the life’s passion of a brilliant book hunter. And that book hunter, without ever intending or realizing it. became a midwife to modernity.”

With the conversational tone of a witty history professor, Greenblatt follows the journey of a fifteenth century Italian cleric, Poggio Bracciolini, to the rediscovery of a lost manuscript – On the Nature of Things by the Roman poet Lucretius. Lucretius wrote a tribute to the ancient Greek philosophy that life should be more that a preparation for death and that the world was made up of atoms – both revolutionary ideas in the B. C. era. When Poggio copies and redistributes the controversial poem, its ideas triggered debate that eventually led to the Renaissance and subsequently the surge of science and democracy.

The hunt for the manuscript takes on the adventure of a novel at first; eventually, Greenblatt reverts to an educational lecture – not as compelling, but an easy way to learn about philosophers who framed the foundation for debates that remain in effect today. If you persist, you will be rewarded with a different view of the revered monks who copied those documents, insights into life among the humanists in the courts of the corrupt popes of the late 14th and early 15th centuries, and a refreshing view of politics and culture – whether or not you agree with the author on the significance of the discovery.

This is a book I forced myself to finish – thinking it would be good for me – and it was. But I was grateful for the eight pages of pictures that appeared in the middle, and the text that ended on page 263, followed by another 100 pages of notes, bibliography, and index that I could skip. My pre-ordered copy of J.K. Rowling’s’ new book just arrived, and I am ready for it.