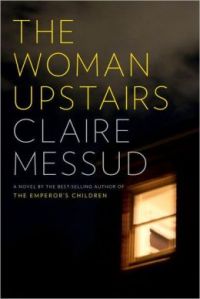 Focusing on a lifetime of regret and a glaring betrayal, Clare Messud spins a slow teasing tale in The Woman Upstairs.  As the story opens, the narrator has clearly survived whatever has made her so angry – and has become stronger for it – but Messud carefully avoids details, giving the surprise ending greater impact.

Nora Eldridge, a middle-aged third grade teacher, regrets her life, especially not having children and not having a career in art.  She fulfills Messud’s definition of the woman upstairs – the bland, nice girl, liked by everyone, loved by no one, who dutifully cared for her ailing mother, visits her lonely father, cheers her aging aunt with store-bought cakes, and treads the mill of unending boredom, realizing that while waiting for her real life to begin, she may have missed it.  She expresses her art through dioramas – dollhouse sized rooms she plans to create to replicate the lives of famous women authors.  The Ibsen reference (Nora, dollhouse) is no accident.

Only the beginning of Emily Dickinson’s room has evolved when Nora’s lonely life intersects with a new family.  The Shahids are in Cambridge for a year, and eight year-old Reza appears in Nora’s third grade class in his European sandals, long curly hair, and Parisian accent.  His father, Skandar, teaches at Harvard and his mother, Sirena, is a multimedia artist who creates feminist performance art.  Messud creates an incident for Nora to meet Sirena – the school bully attacks charming Reza.  Instantly, the two women make a connection that evolves into sharing studio space – a small corner for Nora’s dollhouse rooms, the rest for Sirena’s installation of Wonderland, a life-sized reproduction of Lewis Carroll’s story that allows viewers to participate in the art and be videotaped as they succumb to their imaginations.

As the story evolves, Nora seems to experience a reawakening and imagines she has become part of the Shahid family.  Her fantasies include becoming a second mother to Reza, a lover to Skandar, and a confidante and fellow artist to her new best friend, Sirena.  Nora readily babysits for Reza. sews for Sirena, listens to Skandar’s philosophizing,  but Messud is careful to keep the reader wondering – are Nora’s feelings being reciprocated by the Shahids or is she merely being tolerated  – or maybe even used?

Eventually, the Shahids return to Paris, but Nora keeps her torch burning for them.  Despite their sparse communication, she follows them on google searches, noting when Skandar is promoted and Sirena has new sponsors for her art.  At the age of 42, Nora decides to take a year off from teaching to concentrate on her own art and to travel.  Of course, she visits the Shahids who are polite but estranged dinner hosts.  On one of her last days in Paris, Nora finds an obscure exhibition of Sirena’s videotapes of the Wonderland exhibit –  from both Parisian viewers and those made in their shared studio.

The pacing of the novel is strangely addictive; I kept turning pages – not necessarily to find out what had triggered Nora’s anger – that was easy to forget as Nora’s lonely existence blossomed and then wilted again.  Messud’s language captured smoldering moments:

“This is what’s most surprising about life, really: the most enormous things – sometimes fatal things – occur in the flicker of an eye…”

“…and I didn’t particularly want anyone to tell me it was good….I just wanted to be got, and I didn’t trust that I would be.”

Of course, when the ending comes and you discover the cause of Nora’s anger, you will be shocked.  Messud crafts her ending for speculation: will Nora be so strengthened by her anger that the satisfying possibilities of her life will now come, or will she revert to her old isolation in her fury?  I prefer to think she will channel her lessons learned to finally begin her life.

A captivating but slow revelation of the “good girl” – not the “gone girl.”

2 thoughts on “The Woman Upstairs”