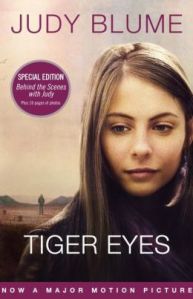 Although I’m a fan of Judy Blume books that tackle delicate issues in a sensitive and sensible way –  Blubber, Are You There God, It’s Me Margaret, Tales of a Fourth Grade Nothing – her story about a teenager trying to cope with the violent death of her father – Tiger Eyes – had escaped me.   Melena Ryzik’s  article in the New York Times – A Mother’s Book Is Her Son’s Movie  – motivated me to find and read the book.

After Davey’s father is robbed and murdered in his small convenience store in Atlantic City, she relocates with her mother and younger brother to Los Alamos, New Mexico to live with her aunt and uncle, a physicist at the famous government laboratory.  As Davey tries to reconcile the violence that took her father, who refused to use bullets in his own gun, she recoils at the protectiveness in her new surroundings: bomb shelters, bike helmets, loaded shotguns in the car.  But the book is not about violence; it is about fears and coping with a sudden tragic loss.  With typical Judy Blume panache, the characters face the issues, learn from each other, and move on.

Having a friend who spent years living and working in Los Alamos, I am anxious to ask about the inside information Blume inserts: Is Bathtub Row really the name of the elite housing?  Are there churches on every corner?  Did you know any “Casuals” at the Lab?  Blume lived in Los Alamos for two years and has a good memory at 75.

The movie version promises to stay true to the book, with Blume as screenwriter and producer, in collaboration with her son.  An added bonus will be the beautiful dramatic setting of New Mexico.   Are you a Judy Blume fan?