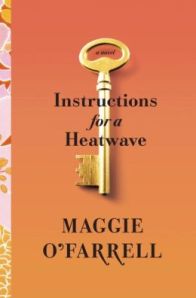 Family secrets are Maggie O’Farrell’s forte and her latest novel – Instructions for a Heatwave – combines her facility for everyday drama with shocking revelations. If you’ve read O’Farrell’s The Vanishing Act of Esme Lennox or The Hand That First Held Mine, you know to raise your expectations for a surprising twist in the plot.

The heat in London is unbearable when Robert, a retired banker, decides to take a walk, but never returns, leaving behind his Irish chatterbox wife, three grown children, and a couple of grandkids. The story moves across London, Ireland, and New York City in 1976 – just before the electronic media made secrets archaic. As Aoife (pronounced ee-fa, the Irish “Eve”) returns from New York City to the London house to help her brother, Michael Francis, and sister, Monica, in the search for their father, Robert’s disappearance fades into the background as O’Farrell reveals the diverting background lives of each character. Everyone has a secret and no one is happy, except perhaps Gretta, the frantic mother who lives in denial. Michael Francis, the eldest son, is a frustrated Ph.D. wannabe who teaches history at a local grammar school and has recently had a one-night stand with a fellow teacher; Monica, divorced from the love of her life, cannot seem to assimilate into her second marriage with her new husband and his young daughters; Aoife, hides her dyslexia from everyone, including Gabe, her new lover, who sends her love notes she cannot decipher. Gretta has an irrational penchant for cleaning out shelves when stressed, and cannot seem to stop talking or giving unwanted advice.

After finding check stubs that date back fifteen years, the family takes the ferry to Cork, Ireland, in search of their father. Of course, there is another woman, but not in the way you may expect; the checks are sent to a convent. As Gretta reveals the mystery, the truth jolts the family – first into further chaos but eventually into redemption with an ending that renews faith in the ability of loved ones to come through for each other when needed. The family rallies and survives, but Robert is another story. He appears in the beginning and in the end, only as a phantom catalyst. I wonder what a good book group would conclude about his future – O’Farrell leaves it open.

I liked the way Maggie O’Farrell can take dramatic incidents and weave them into meaningful moments that connected to me. When she described Aoife breathing in the scents of her parents’ bedroom, it brought back the first time I returned to my childhood home after my father died, and anyone who has siblings will recognize the pride within the rivalry, the understanding and the annoyance. O’Farrell’s stories are dramatically intricate, and if you are looking for neatness and straight story lines O’Farrell cannot deliver. After all, family relationships are messy.

Related Review: The Hand That First Held Mine

2 thoughts on “Instructions for a Heatwave by Maggie O’Farrell”