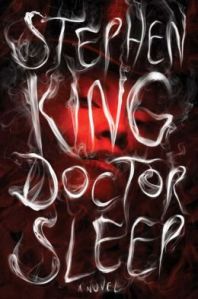 Never having read The Shining, and satisfied from the movie trailers with a

demonic Jack Nicholson that it was too scary for me, I was surprised by the easy flow of Stephen King’s sequel, Doctor Sleep.  Yes, it is scary, as you would expect from this prolific author of horror tales, but the story of a grown-up Danny Torrence with a special gift for reading minds and moving furniture was gripping and did not give me nightmares, as I’d expected.

Still fighting his personal demons, Danny is working hard at beating his alcoholic tendency while using his special gifts to ease the passing of dying patients at a hospice.  He connects telepathically to a young girl, Abra, who also has the powerful “shining,” and together they battle the True Knot, a group of sadistic villains – part zombie, part vampire, all evil – who roam the earth killing children to suck the essence out of them to sustain their own lives.

Although a few scenes have bloody battles, the narrative focuses on the good vs evil theme, as well as the inner strength to overcome personal weaknesses and a debilitating past.  Stephen King tells a good tale, and possibly his books are not as gory as the movie versions that concentrate on the sensational rather than the psychological sensibilities he seems to favor in his writing.  Despite my trepidation, I enjoyed the book.  That said, it will probably be a long while before I read another horror-driven tale.