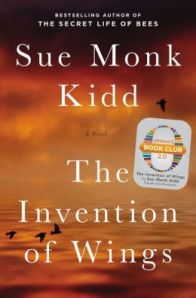 By imagining the lives of a wealthy nineteenth-century family in Charleston and their house slaves, Sue Monk Kidd creates a realistic historical fiction in The Invention of Wings.  Using letters and publications as her source and inspiration, Kidd focuses on a real Southern belle,  Sarah Grimké, who became a Quaker and a zealous abolitionist, predating Lucretia Mott and Harriet Beecher Stowe in her advocacy for women’s rights and abolition.  Sarah’s slave, named Hetty by her white master, but called Handful by her mother, balances the story’s point of view.  Both young women are intelligent, resourceful, and determined, with Sarah hoping to break the bonds of restrictive society rules that relegate her to a secondary existence, and Handful yearning to be free.

The narrative alternates between Sarah and Handful, as they grow from children to young women.  After receiving Handful as a birthday present when she is eleven years old, Sarah unsuccessfully tries to free her.  Promising Handful’s mother that one day she will set her free, Sarah defies her parents and the law by teaching Handful to read and write, and later helps her to escape.

Handful’s mother, Charlotte, a talented seamstress, initiates small rebellions and, when punished, adroitly manages to create havoc for her mistress.  Charlotte’s actions become the catalyst for later resistance, and her quilts – modeled on the African appliqued quilts of Georgian slave Harriet Powers – reflect the history and voice of a now revered tradition.  Quilters will connect with the peace through industry that Charlotte has with the needle in her hand, and recognize familiar pieces in the construction.

Kidd does not shy away from actual tortures created by white slave owners to rein in their slaves: Charlotte’s terrible punishment for stealing a bolt of cloth, Handful’s disfigurement from an accident in the “work house,” the whippings and branding of slaves.   Sarah’s witnessing a slave being beaten leaves her with a lifetime stutter.

Following Grimké’s actual life, Kidd inserts romance and ambition into the mix, with younger sister Angelina eventually becoming her partner in the cause to free the slaves.  Names appear – contemporaries of the abolitionist ladies – Lucretia Mott, Ralph Waldo Emerson, John Greenleaf Whittier – who became more famous than the Grimké  sisters, and Kidd notes that Sarah Grimké’s  writings were the precursor and possible inspiration for Harriet Beecher Stowe as well as the seed for future women’s rights activists.

The story kept my attention and I was happy for Kidd’s notes at the end – saved me from looking up the sisters on google.  As I read, I had wondered how much was true, and the author graciously reveals not only her inspirations but also how much did stray from the facts.  Handful, who is the imagined character, is much more compelling to follow; her strong-willed defiance that often results in terrible consequences creates more adventure and suspense than Sarah’s real life.  Yet, once again, reading how women like Sarah survived and thrived under suffocating circumstances in those times is always a good reminder of a past often forgotten.

One of my favorite lines from the book, which Kidd notes Sarah actually said:

“All I ask of our brethren is that they will take their feet off our necks.”

4 thoughts on “The Invention of Wings”