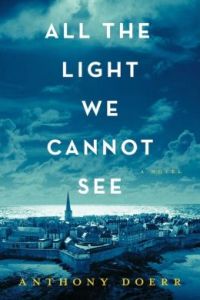 Anthony Doerr was answering questions on PBS Radio Hawaii when I first heard of his book – All the Light We Cannot See.  The lives of a blind French girl hiding in the countryside and a young Austrian orphan reluctantly turned into a Nazi soldier, seemed a diversion from the overused and tired World War II adventure, romance, espionage theme.  I repeated the title over and over as I drove, committing it to memory, hoping I would find the book.  I need not have worried. All the Light We Cannot See is on the New York Times bestseller list.

Doerr’s organization is a bit confusing, and I found myself rereading the first chapters and rechecking the dates before I could get into the rhythm of the story.  The timelines continue to jump around throughout the book, and, at times, following the narrative can get downright frustrating. Nevertheless, Doerr manages to instill suspense, and creates a refreshing and evocative perspective through the eyes of two teenagers forced into harrowing circumstances when the war changes their worlds.

The story begins with the two as they face the 1944 Allied bombing of Saint-Malo in Brittany. Marie-Laure, a blind teenager from Paris, is hiding in the attic of her great-uncle’s house. Werner, a white-haired, 16-year-old German soldier, is buried alive in a basement with the surviving members of his unit.  Doerr then immediately backtracks ten years to fill in their younger lives and the journey each took to get to the point of meeting each other.

Marie-Laure, whose father is the locksmith at the Museum of Natural History, loses her sight when she is six years old.  With the help and encouragement of her father, she reads classics in Braille (“Around the World in Eighty Days” and Jules Verne’s “Twenty Thousand Leagues Under the Sea”), studies botany, and learns how to navigate the streets of Paris.  Werner, orphaned at a young age, lives in a coal mining town  with his younger sister.  After he repairs the radio of a Nazi official, Werner wins a scholarship to a school for Hitler Youth that saves him from mandatory service in the coal mines, but throws him into a moral dilemma as he fights for the German cause.

When the Nazis invade France, Marie-Laure flees from Paris with her father, who has been entrusted with the museum’s valuable gem – the Sea of Flames diamond.  The diamond carries a curse, protecting the holder but delivering misfortune to those around, and this tentative thread weaves through from the beginning of the story when Marie-Laure first hears about the legend on a school tour, to the end of the book, finally connecting all the characters.

Father and daughter wind up in Brittany with her agoraphobic great-uncle and his cook-housekeeper, a member of the Resistance.  Another thread, a radio broadcast from her uncle’s house carrying music and science lessons for children, reappears.  Werner and his sister have heard the broadcasts as children when Werner, using his talent, rewired a broken radio in the orphanage.  Marie-Laure’s grandfather initiated the signal in his Brittany mansion, and the old radio – still working years later – plays an important role in fighting the war against the Germans.

The story has Doerr’s insightful phrasing, playing through the thoughts of the two teenagers – some still resonate with me:

“He {Werner} thinks of the old broken miner he’s seen in Zollverein, sitting in chairs or on crates, not moving for hours, waiting to die. To men like that, time was a surfeit, a barrel they watched slowly drain.  When really, he thinks, it’s a glowing puddle you carry in your hands; you should spend all your energy protecting it.  Fighting for it.  Working so hard not to spill one single drop.”

“If only life were like a Jules Verne novel, thinks Marie-Laure, and you could page ahead when you most needed to, and learn what would happen.”

This is a war story, not a romance, and the tale goes on long after the war is over.  Not everyone survives, but Doerr neatly sews all the threads together, as he follows the characters’ lives twenty and thirty years later.  One mystery, however, he thankfully leaves open, and the story ends on a hopeful note.

Reading All the Light We Cannot See takes patience, but Doerr’s words and story are unforgettable.