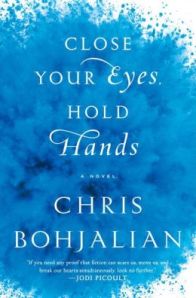 The news explodes with catastrophes periodically – an earthquake, a tsunami, a flood – and our attention is drawn to the horrors for a few days, maybe even weeks if the news cycle has little to do but monitor the clean-up.  After a while, the next explosion grabs the headlines, and those who were closely affected are forgotten.  In Close Your Eyes, Hold Hands, Chris Bohjalian focuses on the life of a sixteen year-old girl, whose father was the engineer who may have been responsible for the meltdown of a nuclear plant in Vermont.  Her life changes in a New York minute from typical teen-age angst and hijinks to misery, paranoia, and homelessness. Despite Bohjalian’s facility with words, this is a difficult book to read.

The protagonist, Emily, loves poetry and aspires to be a writer.  Her favorite author is her namesake – Emily Dickinson, and the story is sprinkled with the reclusive author’s poetry.  The title, however, as lyrical and visionary as it seems, is not poetic. The phrase originated from another horror – the teachers’ directions to the young children who had survived a massacre at their school.  To keep them from seeing their dead classmates, they were instructed to hold hands and close their eyes as they were escorted outside.  Bohjalian insists that the reader know this – his quirky balance between shock and relief that he does so well, as he guides the reader through Emily’s maze from orphaned self-mutilating survivor to sympathetic protector of a nine year-old runaway, and finally, to a semblance of salvation.

At one point, the author notes:

“…We watch it, we read about it, and then we move on.  As a species, we’re either very resilient or super callous. I don’t know which…”

Emily’s trials are unforgettable, and in her case…hope is not the thing with feathers…

10 thoughts on “Close Your Eyes, Hold Hands by Chris Bohjalian”