After visiting Oxford University’s Bodleian Library and the Ashmolean Museum, I had a new appreciation for Deborah Harkness’ All Saints Trilogy, beginning with “A Discovery of Witches.” Harkness based her fictional stories on real characters and a real book. In an interview she noted:

“Elias Ashmole was a seventeenth-century English antiquarian and scholar. He gave major bequests to Oxford University, including the collection of books and objects that provided the foundation for the Ashmolean Museum (which is still in operation today). Ashmole’s books and manuscripts were first kept at the museum and then moved to the university’s Bodleian Library in the nineteenth century. The Ashmole manuscripts include numerous rare alchemical texts. One of the manuscripts, Ashmole 782, is currently missing. As a scholar, I’ve done a lot of research in the Ashmole alchemical manuscripts and always wondered what Ashmole 782 might contain.”

In the Ashmolean Museum bookstore I found a copy of “Alchemy and Mysticism: The Hermetic Museum” by Alexander Roob – the closest I could get to the missing book. A heavy tome,full of wood cuttings and illustrations connecting medieval mysticism with alchemy. Images include hieroglyphs and early scientific illustrations in the fields of medicine, and chemistry. Too heavy for my suitcase, I left it to be rediscovered by another.
Review of “A Discovery of Witches” 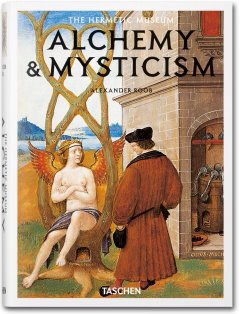