Fiona McFarlane’s “The Night Guest” combines the fears of growing old with insights on watching loved ones diminish. With detailed descriptions, McFarlane transports the reader to New South Wales, Australia, as newly widowed Ruth battles her loneliness and oncoming dementia. The storyline turns into a thriller with the introduction of the formidable Frida and the lurking tiger in the house.

As Frida’s stalking of a seemingly helpless elder develops, McFarlane is careful to maintain the drama and the possibility that all will end well. It doesn’t. Her topic is timely as seniors strive to maintain their independence, sometimes fighting off increasing physical and mental decline. Those villains who would pounce on their vulnerability are everywhere. Placing Ruth’s sons in Hong Kong and New Zealand, McFarlane noted in an interview:
” I am interested in the ways in which older people are suffering from different forms of isolation, as families are becoming more geographically spread out.”

“The Night Guest” followed me from the book group in Edinburgh’s Waterstones to a display in a bookstore window in Oxford. When I finished, I was reminded of my mother’s susceptibility in her 93rd year, and wondered about my own in the future. “The Night Guest” is a thoughtful read with the flavor of mystery and a dramatic climax. 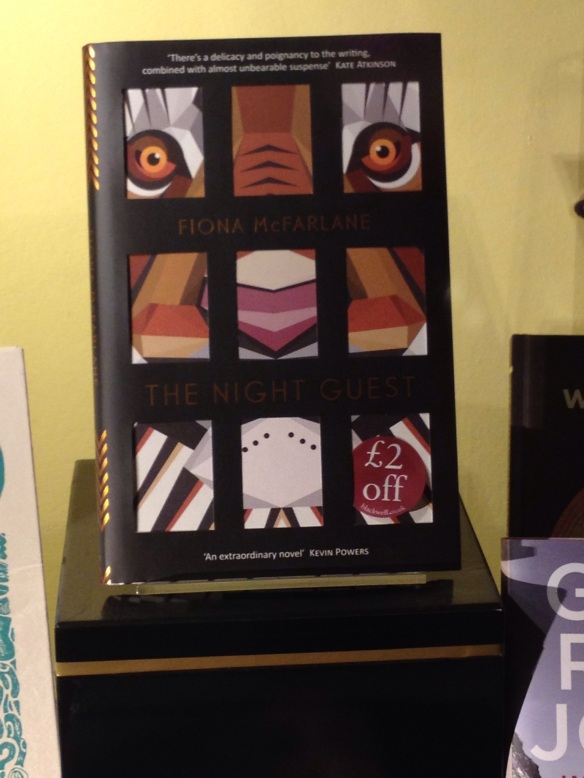