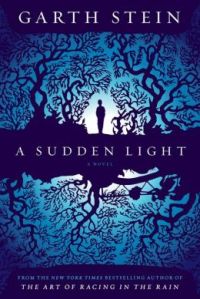 Garth Stein’s The Art of Racing in the Rain was one of my favorite books, and I kept waiting for another of his quirky stories with a philosophical edge.  In A Sudden Light, Garth involves the reader in a debate of sustaining natural resources in the Pacific Northwest vs land development, while cleverly disguising his mission in a charming tale of a family legacy.  Just in time for Halloween, the story also involves ghosts – some real, some contrived – and a fourteen year old hero who saves the day.  For book club fans, Stein includes a list of questions at the end, and enough fodder in the characters and plot to sustain a lively discussion –  a sample to tease you: “How do we reconcile the differences between what we see and what we know?”

Trevor and his father, Jones, bankrupt from his boat-building business and recently separated from his English wife, travel to the old family home, a nineteenth century estate in the hills of Seattle, to convince Trevor’s grandfather to sell the valuable land and the crumbling house.  Jones with his sister Serena are determined to move their father, who has shown signs of dementia, into a retirement home. They plan to sell the valuable property to developers who will subdivide the land and build “McMansions.”

With its secret stairs and hidden panels in the walls, the house is an ideal place for a haunting.  Ghosts of past inhabitants are frequently heard or seen, including Trevor’s grandmother and one of his great-grandfather’s sons, Ben, a passionate environmentalist who swore to atone for his family’s destruction of the Northwest forests for profit.  Trevor is torn – he wants the money from the sale of the land to get his parents back together but he is also determined to help Ben, an Oscar Wilde version of the Canterville Ghost who frequently appears to  him to champion the return of the property to nature.

Stein’s descriptions of the peace brought by the natural land, the trees, the birds – are all reminiscent of Thoreau and John Muir, whom he invokes frequently.  He delivers the beauty of the surroundings with thoughtful metaphors – ““hummingbirds are to humans as humans are to trees.”  But his story focuses on the family drama as he reveals their history with Trevor’s dreams, overheard conversations, and reminiscences from Serena and Trevor’s grandfather.

The ending is not predictable but satisfying, and I thoroughly enjoyed the book; but then I have a penchant for a well told romantic ghost story with pithy phrases.

My Review of: The Art of Racing in the Rain