When my ninety year old father-in-law requested a harmonica as a birthday gift, I was surprised at his ability to play old singalong tunes he had learned in his younger days.  The notes from his harmonica seemed as magical as the one Pam Munoz Ryan uses as the focus for her children’s 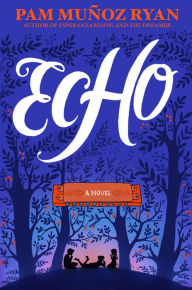 The story begins and ends with a fairy tale, lending a mystical quality to the lives of the three young children who play the harmonica, as it is passed on from person and place.  Ryan uses World War II as the setting, and targets children with a talent for music.  Each child also has an obstacle to overcome, with music as their savior.The book is divided into three separate tales and each section ends with a cliffhanger, until all ends well as the grown-up children come together in the end.

Years after Otto receives the enchanted harmonica, mysteriously imbued with the voices of three abandoned princesses in the forest, Freidrich finds the harmonica in the local harmonica factory in 1933 Germany. Freidrich conducts symphonies in his head, despite ridicule from others and the purple birthmark on his face. Although his sister, Elizabeth, has joined the Nazi youth group, Freidrich, his father and his uncle, resist, and are targeted for questioning.

Mike and Frankie are orphans in what could be Miss Hannigan’s horrible home for boys in 1935 Philadelphia.  Both have a talent for the piano, and are miraculously adopted by a female Daddy Warbucks character, who also happens to be a former concert pianist.  Threatened by the possibility of being sent back to the home (Auntie really wanted a girl to adopt), Mike makes a deal – if he wins a spot in the national touring harmonica orchestra, his younger brother will not be sent back to the orphanage.

Finally, Ivy Lopez is the newest owner of the harmonica.  Her story in 1942 Southern California, a year after Pearl Harbor, focuses on racism and discrimination against migrant farm laborers and Japanese Americans.  Ivy’s father is hired to oversee a farm in Orange County, whose Japanese-American owners, the Yamamotos, have been sent to an internment camp. Ivy is forced to attend a separate school but is allowed to join the after school orchestra in the main school. She finds solace in music, and passes on the harmonica to the young Yamamoto who visits his family’s old farm before going off to war.

The story follows a formula for each section, providing historical information within the context of well-rounded characters.  Although the plots are sometimes hokey, the characters redeem the message of strength and courage. When Ryan pulls all the players together in the end, the resolutions to their trials seem contrived, but the endings justify their persistence and, anyway, fairy tales should always have happy endings.

The book is a little long and one of the stories could have been omitted but the careful attention to history and prejudice is worth the read – at any age.