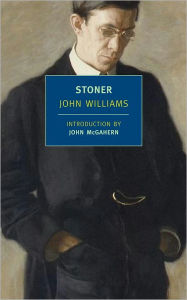 After discovering Jane Gardam’s Old Filth, I did not expect to experience the thrill of a new author with the story of a man who resonated with me – until I found Stoner by John Williams.  Maybe it was the descriptions:  academia with its internal politics; the students – some lackluster, some promising; a professor’s unrequited love of the Canon; or the hazy acknowledgement of professorial dedication.  But more likely, it was the florid descriptions of place and time – Missouri in the early twentieth century, and the wonder of looking inside the head of a man who struggled with life and love.

The first lines of Stoner assure the reader as the story unravels: Stoner stays in his job at the university for forty years, is recognized by his peers as well as students as an outstanding teacher, yet never rises above the rank of assistant professor.  For anyone familiar with the university system, this information is tantalizing.  With so many years at one institution, something must have happened to keep him from rising in the ranks to full professor – or even jumping over to administration.  And so Williams slowly reveals Stoner’s life, from his young life on a farm to a doctorate in literature, through a strange relationship with a wife, a tentative bond with a daughter, a steamy love affair with a graduate student, and an epiphany of honor affecting his career.

The story is slow and methodical, with pithy passages requiring thoughtful attention.  I enjoyed the immersion into Stoner’s thoughts and could easily visualize his surroundings. Perhaps this book is not for everyone, but for me, it was one of the best I’ve read.

The novelist Colum McCann called it “one of the great forgotten novels of the past century … so beautifully paced and cadenced that it deserves the status of classic.” The New York Times called it “a perfect novel.”

Thanks to my good friend and fellow reader/writer for introducing me to Stoner – “The Greatest American Novel You’ve Never Heard Of ” (from Tim Kreider, The New Yorker).  I agree with Steve Almond of The New York Times – you should seriously read Stoner right now.