In her essay for the New York Times Book Review this week, Vendela Vida explains how she translated her Highly Unlikely  life experiences into novels. She is not the first author to use real life as a hook and then embellish into fiction; sometimes it’s hard to distinguish fact from fiction.  I remember a book group participant insisting the steamy dialogue between Frank Lloyd Wright and Mamah in Nancy Horan’s Loving Frank had to be real.

A mugging in Central Park inspired Vida’s first novel And Now You Can Go, and the unexpected theft of her luggage in Morocco led to the main character’s  switched identify in her latest book The Diver’s Clothes Lie Empty. The thefts were real, but Vida imagined the rest of the story.  I have not yet read how poetry dissuaded the real-life assassin in And Now You Can Go (Vida insists it happened to her), but I remember enjoying the premise of a switched identity in The Diver’s Clothes Lie Empty – might be worth rereading since I’ve already forgotten the ending. 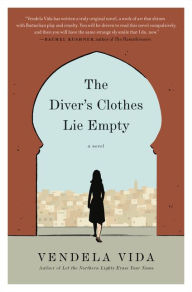 Have you ever dreamed of driving off into the sunset, changing your name, and disappearing? In Vendela Vida’s The Diver’s Clothes Lie Empty, a theft in Morocco triggers a series of identity swaps for an American tourist.

Using the mysterious and exotic setting of Casablanca and focusing on all travelers’ paranoia of losing valuables (Rick Steves’ hidden security pouch sells well), Vida slyly manipulates the story line, drawing the reader into seemingly innocuous events. The thirty-something woman (we never do know her real name) morphs from a harried Florida traveler on an economy trip to staying at a posh hotel as Sabine Alyse, when the local police replace her stolen backpack with someone else’s. Her adventure continues when she is tapped to be a stand-in for a famous American movie star who is filming at the location. A final bus trip out-of-town reveals her true identity when fellow Floridians on holiday recognize her – the past is hard to escape.

The reason for her trip remains unclear until the end, when her dark secrets are revealed. I didn’t see it coming, and I won’t spoil it for you, but the reasons for her erratic behavior are not jet lag.