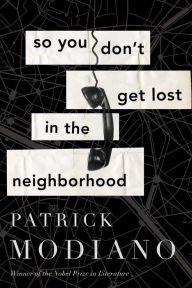 Have you ever lost some of your “Contacts” as you tried to transfer them from one iPhone to another, as I did?  Would your back-up be the Cloud or an old address book buried in a desk drawer?  In Patrick Modiano’s So You Don’t Get Lost in the Neighborhood, the lost and found address book becomes the premise for a threatening mystery involving possible murder, blackmail, and a lost past.

Although the story is short, it requires attention to follow the trail, and to decipher the real focus.  The two sinister characters who find the address book and demand information on a name in the book are only vehicles to Daragne’s uncovering a dark childhood secret, but this is not immediately apparent.  The characters fade and disappear as Daragne’s detective-like hunt for clues to incidents evading his memory reappear.

In the first lines of the novel, the real premise is set – a small catalyst (losing an address book) may trigger the path to repressed memories.

“Almost nothing. Like an insect bite that initially strikes you as very slight. At least that is what you tell yourself in a low voice so as to reassure yourself.”

Daragne is telling the story as an older man, a respected and popular novelist – like the author.  As he begins to remember important names and places, he questions his own memory.  How often does memory trick us into a different version than what actually happened?  The story picks up pace, and the evidence pointing to a childhood trauma finally emerges.  The end comes abruptly, with more questions than answers.

Maybe because the novel is translated from the French and is set in Paris, the language has a smoldering aura mixed with the flavor of a film noir.  I  could envision the main character, Jean Daragane, sitting quietly, sipping coffee in an outdoor cafe, as he remembers people and places threatening to upend his life.

Kaiama Glover’s article in the New York Times Book Review section drew me to this small book (155 pages) – a novel promising to reveal the revered author, winner of the 2014 Nobel Prize for Literature. In his summary of the book, Glover notes:

“{the book is} rife with explicit allusions to the real life of Patrick Modiano, as told in his memoir a decade earlier, the narrative {chronicling} the efforts of an isolated and aging novelist to confront an elusive past.”

Although Modiano has a loyal following for his mysteries in France, and has written over thirty books, this author was new to me. So You Don’t Get Lost in the Neighborhood is a compelling read – despite the red herrings and McGuffins in the mystery.  Modiano does not follow the formula for mystery – he breaks it – and creates a suspenseful and thoughtful dilemma. Deciphering the possibilities would make for a great book discussion.