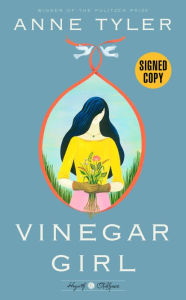 Anne Tyler delivers another quirky romance in Vinegar Girl in her delightful twist on The Taming of the Shrew published by Hogarth Shakespeare as one of a series of novels based on the major plays.

In Tyler’s version, fiery Kate lives at home with her father, an absent-minded scientist at Johns Hopkins on the verge of an important discovery for autoimmune disorders. Her sister, Bunny, a scatterbrained teenager more interested in boys than books plays the beautiful Bianca.  Their mother died long ago, and Kate has the responsibility of the Baltimore household, organized by her father’s hilarious system to maximize efficiency. Homemade meals consists of  a scientific formula of  “beans, green vegetables, potatoes and stewed beef pureed into a grayish sort of paste to be served through the week.”

Kate has the reputation of her model from Shakespeare, yet Tyler softens her attitude with common sense – but missing any traits of diplomacy.  She drops out of college because she calls out her botany professor when he botches a lecture on photosynthesis, and she blithely refuses to falsely flatter a pre-schooler where she is an assistant to the elderly teacher, when the drawing is no good, much to the dismay of the head teacher and the parent.

Pyotr Shcherbakov plays Petruchio; in this story he is a brilliant yet blunt spoken scientist from foreign lands and assistant to Kate’s father; he is about to be deported unless he can change his legal status.  Kate’s father concocts a scheme to have Kate marry Pyotr to secure the ongoing research, and surprisingly, Kate agrees.

The twists and turns involve a vegan boyfriend, research mice, a gaggle of intolerant relatives and friends – even a guitar playing granola boy as a foil for Kate’s affections. Although the story is predictable, Tyler infuses an element of suspense to the upcoming marriage, with the possibility of its not taking place.  Of course, all’s well that ends well, and Tyler happily includes an epilogue, fast-forwarding ten years beyond to note how successful and happily ever after their lives continue.

Anne Tyler can’t write fast enough for me.  I read Vinegar Girl as soon as I could get it and polished it off with relish in an afternoon.  Kate is my favorite character from Shakespeare; it’s hard not to identify with her forthright opinions, her independence, and her cranky moods.  She is often misunderstood, masking her vulnerability in stubbornness but Anne Tyler captures her innate goodness and strength in her modern adaptation, and has Petruchio love Kate for who she is – no taming needed.

Reviews of other Anne Tyler Books: