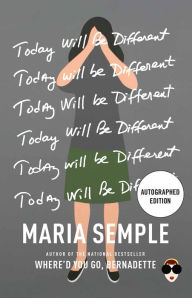 No matter how miserable or crazy your life might be, Maria Semple manages to make her characters’ problems worse, and in Today Will Be Different – more poignant.  Eleanor Flood, a quirky graphic artist married to a serious hand surgeon, battles her past and struggles with her present. Of course, she wins, as do all Semple’s idiosyncratic heroines.

The story unfolds in one day, packed with more trouble and good intentions than most of us have in a year. The theme, however rings true: how many of us wake up each morning determined to turn over a new leaf and reform our ways. Despite the one day format, Semple delivers Eleanor’s backstory and reveals her past demons through her interaction with other characters. As she tracks down her husband who is missing from his office, Eleanor has a series of missteps.  She sabotages the opening of an art exhibit, steals a set of keys from a parent at her son’s school, loses her contract for an unfinished graphic novel based on her childhood, and more.  Sample was the screenwriter for several successful television series, and she packs a season’s episodes in this book.

Although the plot jumps around and takes a while to get settled into the story,  this latest Semple offering will have you laughing, nodding in agreement at her pithy views on life, and hopeful – maybe life will be different – tomorrow.

2 thoughts on “Today Will Be Different”