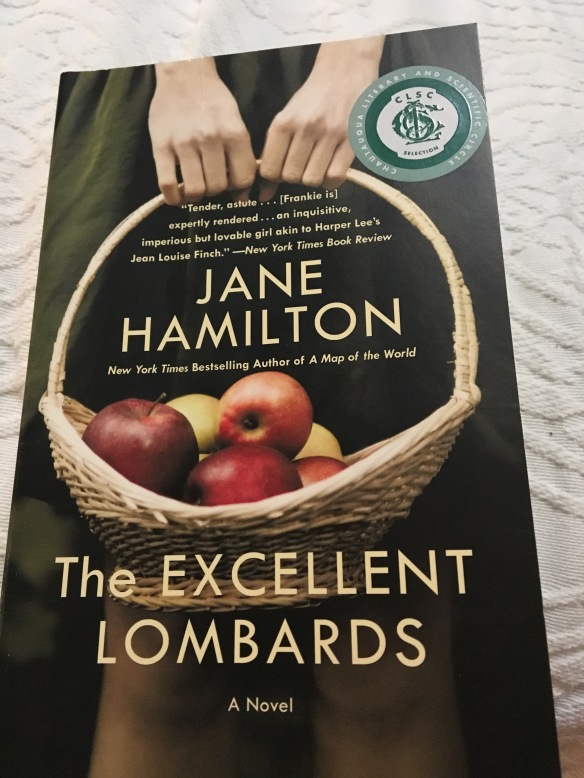 If I hadn’t read Ann Patchett’s Commonwealth, I may have missed Jane Hamilton’s The Excellent Lombards. Patchett recommended the book as “the book Hamilton was born to write.” Like Patchett’s Commonwealth, The Excellent Lombards focuses on a family, and has some biographical references from its author. Coincidentally, both books also have a character named Frances.
﻿
Since Hamilton tells this coming of age story through the voice of twelve year old Mary Frances Lombard living with her family on a small Wisconsin apple and sheep farm at the end of the twentieth century, the rhythm of the narrative is hard to follow at first. Ownership of the farm lands has been passed down through generations and is now shared by Jim Lombard, Frankie’s father, his cousin Sherwood, and an elderly aunt May Hill. Everyone from old May Hill to the children, Frankie and her brother, William, work the farm, except Nellie, Frankie’s mother who is the town librarian.

Frankie is determined to stay on the farm forever, imagining a long life there with her brother, but the small farm struggle against land development and innovative crops, as well as inner family rivalries, threaten her dream. Change is hard, especially when you don’t want to grow up.

Hamilton, of course, has a message for the reader through tense moments at town hall meetings or around the dinner table, but the novel’s humor, cleverly flowing through Frankie, kept my attention – from her pushing the library carts through the halls in a synchronized dance routine to being locked in the old lady’s bedroom while she was sharpening her spying skills.  Frankie will go to extremes to keep everyone happy, purposely losing the geography bee to her younger lispy cousin to make her feel better.

Hamilton touches on historic moments such as the terrorist attack on the New York City Towers, but only as placements in time. The real terror is the developing history noone can stop. The story ends with Frankie facing her own possibilities, opportunities, and obstacles – some seem inevitable. With grace and wit, Hamilton delivers her perspective on the difficulty of letting go.