At a recent conference Random House representatives Steve Atinksy and Wade Lucas offered a list of books to read. 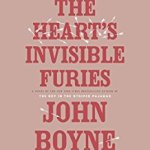 At the top of their list was John Boyne’s The Hearts Invisible Furies, a 2014 publication with good reviews but not a popular following.  Their teaser might be enough for you to find this tormented Irish tale:

“Boyne’s new novel opens in the small west Cork village of Goleen, in 1945, during mass in the parish church. Instead of giving a sermon, Father James Monroe rises to denounce 16-year-old Catherine Goggin, recently discovered to be pregnant. The priest calls her up to the altar to shame her before family and congregation, before kicking her out of the church and banishing her from the parish. Boyne introduces this scene by informing us that it will be known later that this priest has himself fathered two children in the area, and his brutality is inflamed rather then tempered by hypocrisy.”

Their recommendation for book club discussions is Anatomy of a Miracle by Jonathan Miles – a story about a paraplegic vet who suddenly rises to his feet, catching the attention of religious leaders, reality TV producers, and skeptics.  Just reviewed by the New York Times, Christopher Beta asks “is he healed or is it a hoax?”

Man Booker Prize winner Julian Barnes makes their list with his new book  – The Only Story – another small book (261 pages) packed with large ideas.  The Only Story opens with a question: “Would you rather love the more, and suffer the more; or love the less and suffer the less?”  A story about an old man reminiscing about his affair with a 48 year old woman when he was 19, the Washington Post review promises the same “writerly skill” as The Sense of an Ending, but “is so full of grieving sighs that it practically hyperventilates. ”   Sounds depressing.  Let me know if you read it.

A few on their list I’ve read and reviewed: