One generation measures time from the day John F. Kennedy was shot; yet another from the day John Lennon was shot in front of the Upper West Side Dakota apartment building.  If you are familiar with New York City and a fan of the late nineteen seventies, Tom Barbash offers a familiar ride through time and place. Despite the slow moving plot and the expected finale of Lennon’s death, the references to history are entertaining and nostalgic.

Having barely survived his Peace Corps experience in Africa, twenty-three year old Anton Winter returns to New York City to recover from malaria and reincarnate his famous father’s talk show career.  Buddy Winter may be based on a number of famous late night hosts, but Jack Parr seems to be the closest in temperament and panache, and Barbash makes the connection in Buddy Winter’s Phil Donahue interview, referring to Parr’s famous  walk off on the Tonight Show in the nineteen sixties in the middle of a show stating, “There must be a better way of making a living than this.” The fictitious Buddy walks off the set after a nervous breakdown.

John Lennon is a neighbor of the Winters at the Dakota, and Barbash portrays him as a regular guy with Yoko as the entitled and precocious wife who defined the Millennial attitude long before any of them were born. With its famous Gothic facade and its water-powered elevators, the building itself is a main character, having housed many famous people, including Leonard Bernstein, Lauren Bacall, and Boris Karloff, a previous occupant of the Winters’ apartment.

John and Anton bond over a sailing trip to Bermuda, where a triangle storm almost capsizes their boat.  They all survive with John released from his writer’s block and composing again.  The narrative alternates between conversations revealing the real John Lennon through his friendship with Anton, and Anton’s struggle to create his own life free of his father’s dependence on him.  The imagined conversations are easy to believe, as the plot gallops to the inevitable ending.

Barbash imagines a Beatles reunion on Buddy Winter’s new show in January, but John Lennon is shot outside the Dakota in December.  Lennon was only 40 years old when he died but Barbash brought him back to life in The Dakota Winters. 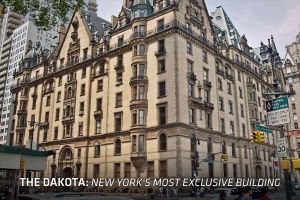 Although the Dakota on 72nd and Central Park West is home today to Yoko Ono and Connie Chung, among others, the co-op remains one of the hardest to get into in Manhattan. Cher, Madonna, Billy Joel, Carly Simon, and even Melanie Griffith and Antonio Banderas have all been rejected by the building’s selective board.