If ever there were a rapscallion like Huck, it would be Duchess, the young escapee from Salina prison, who hides out in the trunk when the Sheriff takes Emmett back home to attend his father’s funeral, and then “borrows” Emmett’s inheritance. Instead of rambling down the Mississippi on a raft, they are driving down the old Lincoln Highway in a Studebaker.

All the boys are on an adventure, and the characters they meet could more closely align with the journey of the Odyssey, neatly used as an inspiration in the book of heroes by Professor Abacus Applenathe, a gift from the town’s librarian to Billy, the eight year old younger brother of Emmett. Billy still believes in dreams and magic, while Emmett and Duchess are jaded at eighteen, one looking for easy street, the other for a better life.

I’ll leave it to you to connect the characters they meet to famous literary or mythological counterparts, but Penelope is there, in the form of Sally – true and waiting.

It’s a fun road trip to make, although the switchbacks at each chapter to another character speaking can be disconcerting. In the end, some keep traveling the highway while others come to their roads end.

One of my favorite authors, Amor Towles, has a new book coming in October – The Lincoln Highway. Today in the New York Times Book Review, editors have included him in their ask an author section. He responds to questions with a list of books he has read, books he recommends, and more – a wealth of good ideas for individuals as well as book groups.

Towles meets with a small group of friends monthly to discuss a novel:

“One spring we read Henry James’s “The Portrait of a Lady,” Gustave Flaubert’s “Madame Bovary,” George Eliot’s “Middlemarch” and Leo Tolstoy’s “Anna Karenina,” a project we referred to as “19th-Century Wives Under Pressure.” Often, we’ll read five or six works by a single writer chronologically. We’re about to launch into a survey of the Australian Nobel laureate, Patrick White. So, his “The Tree of Man” is at the top of my pile.”

“The list included an array of inventive writers and stylists, most of whom I had never heard of, including Donald Barthelme, Italo Calvino, Evan S. Connell, Julio Cortázar, Jean Genet, Elizabeth Hardwick, Knut Hamsun, Milan Kundera, Grace Paley and Alain Robbe-Grillet. With the list fraying in my pocket, I began tracking down these novels whenever I was in a used bookstore.”

And for guilty pleasures, he includes:

“…the Lew Archer novels by Ross Macdonald, the George Smiley novels by John le Carré and the Parker novels by Richard Stark, {and} the Bosch books Michael Connelly}.”

In preparations for his new novel, The Lincoln Highway, Amor Towles mentions a few books he read:

“My new novel, “The Lincoln Highway,” takes place over 10 days in June of 1954, so in anticipation I read a number of American works from the mid-50s including James Baldwin’s “Go Tell It on the Mountain” (1953); Raymond Chandler’s “The Long Goodbye” (1953); Flannery O’Connor’s “A Good Man Is Hard to Find” (1955); and Sloan Wilson’s “The Man in the Gray Flannel Suit” (1955)… In aggregate they provide a snapshot of America’s socioeconomic, regional and racial diversity.”

Lots of good ideas for reading, and if you have not yet read Rules of Civility and Gentleman from Moscow, now is the time.

It started with Sue Miller’s Monogamy.  With that title, I expected a love story but Miller delivered something else.  With infidelity and death mixed into romantic interludes, the story left me feeling sour.

I went on to read Eleanor Lipman’s new short novel, available now only on Kindle, and to be published after election day.  I thought I could laugh at the bumbling episodes of Rachel to the Rescue, with a fictional satire on Trump’s incompetence and infidelity, but I couldn’t.  Maybe after the election – depending on who wins.

Finally, I turned to Sophie Kinsella – surely, she would save me from the world.  With the title Love Your Life, it promised a fantasy love affair somewhere in the Mediterranean, but, alas, it is not published yet.

Amor Towles has a new short story with a welcoming title – You Have Arrived at Your Destination but it’s only available on audio, and I can’t find my earphones.

Not even the Barefoot Contessa with her new Modern Comfort Food could save me.  The pictures were sumptuous but did not motivate me to get into the kitchen and cook. If only Ina did takeout.

Must be me, right?  I’ve ordered books from two of my favorite inde bookstores, but it’s so long ago – they are coming by media mail – I’ve forgotten what I bought.  I’m pretty sure the new Ken Follett book is in the package, and, if it ever gets here, should keep me busy for a while.

In the meantime, back to watching movies and taking naps.

With subtle humor and philosophical asides worthy of Montaigne, whose book is referenced in the story, Amor Towles records the life of Count Alexander Rostov, under house arrest in Moscow’s luxurious Hotel Metropol in A Gentleman in Moscow. The story follows the Count from 1922 to 1954, embellishing Russian history with the Count’s determination and sophisticated view of his situation.

Prison can be anywhere – sometimes within our own walls – but knowing escape is possible can make life less forbidding.  Rostov is spared the execution many of his wealthy royal contemporaries suffered in the overthrow of the monarchy because of a poem he has written. His exile is in the hotel he has frequented, but his suite is replaced by a one hundred foot closet.  If he dares to leave the hotel, he will be shot on sight.

For a while, Rostov manages to continue a leisurely lifestyle, reading his papers in the lobby, taking his meals in the hotel restaurants, drinking brandy at the bar.  The gold sovereigns stashed in his Archduke uncle’s desk help, but inevitably the limits of the grand hotel become claustrophobic.

Throughout Rostov’s tenure at the hotel, a series of characters change his view and save his sanity.  Just as each person we meet adds something to our lives, each of Towles characters appears just as he needs them.  The first, Nina, is a precocious little girl in a yellow dress, a guest at the hotel, who gives him a new purpose and a new view on his restrained circumstances.  Later in the book, her daughter repeats the favor, and becomes his surrogate daughter. The workman on the roof, who offers him coffee, saves his from despair, and his three friends – the chef, the maitre’d, and the seamstress – and Anna, the actress who becomes his lover –  give him a sense of purpose.  Others come and go – bringing with them the history that continues outside the hotel doors, and, at times, offering their influence.

Although Rostov makes the best of his circumstances, it’s hard not to want him to escape or perhaps use his access to spy on the Politburo members who frequent the hotel.   Towles punctuates Rostov’s yearning to see the apple trees of his youth, sit in the opera or stroll around the city again.  Citing the Count of Monte Cristo, Towles reminds the reader that the mind can break free of any prison, and Rostov, ever the gentleman, makes the best of his circumstances, eventually insinuating himself into the fiber of the hotel’s workings.

Sadly, politics is changing the city and the country; inevitably, these changes seep into Rostov’s domain.  Some are funny – when the Bolsheviks remove all the labels from wine bottles; others are painful – when Rostov’s friend is sent to Siberia for challenging a phrase in a text.

Towles divides the story into five “books,” cleverly lulling the reader to a sense of satisfaction at the end of each section, then creating a new set of characters  and a new adventure in the next “book.”  Just as in The Rules of Civility, Towles uses language to transport the reader to a more sophisticated style of living.  It would be difficult to be reading this book while slurping soup; the reader would be more inclined to sit quietly with a glass of wine at hand.

A book to savor – A Gentleman in Moscow left me with a better sense of Russian history, a yearning to have known a man like Count Rostov, and a determination to command my own circumstances. 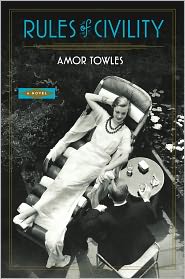 When you see a car accident that you missed by minutes, or bump into someone because you decided to turn right instead of left, do you think fate? serendipity? Katey Kontent hops into the back seat of a car instead of the front, and her action changes the direction of her life in Amor Towles’ Rules of Civility.

Katey flashes back to her life as a twenty-five year old from Brooklyn trying for a career, a husband, a life, in New York City in the late 1930s, when she sees a picture of Tinker Grey in an art gallery thirty years later.  Back then, she was trying to reinvent her life as the daughter of immigrant Russians, when she and her boardinghouse roommate, Eve, from Indiana, meet handsome and wealthy Tinker Grey on New Year’s Eve.  Although the threesome pal around together, Katey defers to Eve in pursuit of the rich prospect; Tinker, however, seems drawn to Katey.  In a bizarre twist, a car accident injures Eve, and Tinker’s guilt drives him to compensate by focusing attention and money to care for her. As Eve slowly recovers but remains scarred, it’s clear that Katey is now the third wheel. 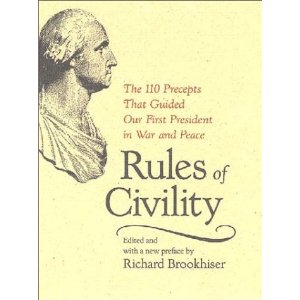 guide for behavior; the 110 rules of etiquette included recommendations for proper dress and public behavior, but also address moral and decency issues.  Tinker has a worn copy that at first seems whimsical but later provides Katey with the clues to who he really is, when she discovers his background and source of income.  Towles includes the listing in an Appendix; number 11o suggests the theme for the story:

110th –  Labour to keep alive in your Breast that Little Spark of Celestial fire Called Conscience.

Facing the possibility of a dull career in the secretarial pool, as Tinker and Eve abandon her to fly off to warmer climes or party with Tinker’s wealthy friends, Katey bravely quits her dull job, and finesses her way into Conde Nast.  Through Tinker’s connections,

Katey continues to taste the good life, partying with Dickie and Bitsey and Wallace, New York’s wealthy elite, who live behind a social veneer that Katey eventually cracks open.  Of course, their lives are not what Katey supposes they are.  With the witty observations of a Dorothy Parker, Towles examines Katey’s climb to the executive suite and her new society friends in a carefree New York City as she tries to follow the rules.  And rules are everywhere…

“…right choices by definition are the means by which life crystallizes loss.”

More than an historical romance, Rules of Civility has the flavor of an old black and white movie. The scenes from New York City may remind you of Ginger Rogers and Rosalind Russell in smart outfits and sharp banter, in the time after the Depression and before World War II when “girls” left small towns to room at the Barbizon or boarding houses in Greenwich Village, and rich socialites gave parties and escaped to the Hamptons.