If you remember Laura Lippman’s Sunburn, you will recognize the same venue – Baltimore – and a similar woman in crisis manipulating the suspense in her new novel – Lady in the Lake.  Lippman calls this a newspaper novel, using real sources for credibility, while imagining an attractive thirty-something woman’s climb to popular columnist, deftly using the bodies she finds along the way to further her career.

I can think of a number of actresses who might want to play the role of Madeline Schwarz; she’s attractive, smart, feisty, and sexy.  Once she decides to leave her comfortable twenty year marriage with Milton, nothing will stop her from pursuing her dream job of being a journalist.  After she and her friend discover the dead body of Tessie Fine, she finesses her correspondence with the accused murderer in jail to get a low-level position at the Star, Baltimore’s afternoon newspaper.  With this taste of success, she decides to pursue another death of a young girl, Cleo, found in a city park lake fountain and nicknamed the lady in the lake.  These two murders drive the plot, while Maddie’s struggles with herself and the system capture our attention.

Although Maddie is the main voice in the story, Lippman cleverly diverts to others who connect with her, giving short chapters to their voices: Maddie’s lover, the newsman who covers the police beat, a Baltimore Orioles baseball player after a game, the mother of the murder victim, a psychic, and others.  The most persistent voice is Cleo’s ghost, as she reacts to Maddie’s interviews with family and friends, and her message is consistent – stop prying.

Maddie appears needy and coldly ambitious. She manages to ruin a few lives as she uncovers the truth, and she pays for her mistakes in blood.  Lippman ties up the loose strings, answering all questions in the end, but not without a double twist I did not see coming. 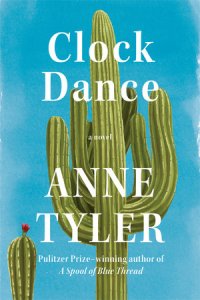 Anne Tyler has once again made an extraordinary story out of ordinary lives in Clock Dance. Set in her favorite city of Baltimore, the story moves through decades of a typical family – until a phone call for help changes everything.

Tyler has the talent for making her characters relatable. It’s hard not to identify with the ftizzy haired little girl who dutifully does what she is told, and who becomes the woman who follows her husband – not once but twice. Perhaps the first time is for love, despite the pull to pursue her own talents, but the second time seems complacent and secure.

The story follows Willa as a child living with a mercurial mother who periodically abandons the family and a meek but reliable father, then jumps ten yesrs to Willa as a junior in college, in love with handsome and self- centered Derek. “It was tempting,” she thinks, “to consider the adventurousness of throwing everything over to marry Derek” – and she does, forsaking her own dreams.

In twenty yesrs, Willa has become a widow with two grown sons and an estranged sister. Life is not hard but certainly  not interesting as she follows her widowed father’s advice to live moment by moment.   The story jumps again to 2017. Willa has remarried another self-centered, patronizing clone, Peter, and settled into a golfing community in Arizona. Willa doesn’t play golf.

When Willa gets a phone call asking her to fly from Arizona to Baltimore to care for the nine year old daughter of her oldest son’s former girlfriend, whom she’s never met, the pull to be needed is too irresistible. Nevermind the girlfriend snd her daughter are no real relation to her; she goes.

In Baltimore the cast of characters expands to a gritty chorus, offering Willa another chance at having a family, and forcing her to become the person she was meant to be.

Perhaps the ending is predictable, knowing Tyler’s affinity for second chances and redemption, but it is nonetheless satsfying. Fans of Tyler’s writing will recognize her signature talent for instilling insight and humor into everyday living, and her message is clear – we don’t have to settle for other’s expectations of us; we can take a leap into life and dance – no matter what time in our lives it is.

Set in Australia, Jane Harper’s The Dry has a dried-up river and bush ready to burn; Laura Lippman’s Sunburn leaves its mark in familiar ground for this reader – Baltimore, Ocean City, and Delaware.  Both are gripping tales of murder with compelling twists and surprise endings – both are page-turners.

In The Dry, the brutal murders on a farm bring federal agent Aaron Falk back to the town where he and his father were banished years earlier when Aaron’s friend was found drowned in the river.  When Aaron returns for the funeral of his best friend and his family, he uncovers raw wounds the town has never forgotten, and suspicion that he was responsible for the girl’s death twenty years earlier.  Mysteries around the all murders seem connected, and as he stays to investigate, the story leads him to surprising revelations about the people he thought he knew. The villain is cleverly concealed until the very end, and not one I suspected.

In Sunburn, Lippman keeps the reader off balance, acknowledging as the story opens that Polly Costello has killed her abusive husband and abandoned her two girls, one disabled with cerebral palsy.  Nevertheless, Polly seems to be a sympathetic character – her life sentence is pardoned by the governor, and she wins an insurance settlement against the hospital where her disabled daughter was born.  The handsome private detective, hired by a crooked insurance salesman for his share of the money, falls in love with her.  Will he turn her in or run away with her?  Lippman’s clever twists are not that simple, and she maintains the suspense – juggling the good guys and bad guys, and flipping intentions back and forth with another murder in the middle of it all.  It’s fun to read, and the ending is a satisfying surprise I did not predict.

Anne Tyler’s latest book –  A Spool of Blue Thread –  begins as a simple family saga, introducing the Whitshanks, a seemingly innocuous group of characters – hardworking father, caring mother, responsible sisters, the black sheep brother, and the son who will take over the business.   Just as you are comfortably settled into their lives, Tyler shifts gears, introducing layers of generations, revealing idiosyncacries, and offering her trademark wisdom about relationships and life.

Here are a few gems I’d like to remember:

“Believe me, it was a dark day in the universe when the internet started letting people research their own symptoms.”

“They say sweets are helpful in times of sadness, she said. I’ve always found that to be true.”

“He (God) gives them more than they can handle every day of the year…Half of the world is walking around just…destroyed, most of the time.”

“…children figure out so young that people die. It makes you wonder why we bother accumulating, accumulating, when we know from earliest childhood how it’s all going to end.”

Although the process of growing up and growing old dominates the story through three generations, Tyler deftly inserts family resentments and good intentions gone awry.  The sudden death of a main character scatters the family focus, and the aftermath of a secret uncovered  rings true.  Maybe Tyler is offering a warning: destroy all those written notes, long before you think it’s necessary (Jane Austen had the right idea – better to leave in mystery).

As in all her books, Tyler provides a back story for all her characters, and neatly ties up all loose strings – in this case, with a spool of blue thread.  But her books always end with a sigh, and the promise that life goes on.  For Anne Tyler, it’s the middle that counts – not necessarily the beginning or end.  If you are a Tyler fan, you will easily fall into the familiar rhythm and enjoy yourself.

While reading Donna Leon’s latest mystery – By Its Cover – I remembered the first time I had heard of a book thief targeting rare books for their maps and illustrations.    When I lived in Maryland,   Gilbert Bland was caught stealing maps from rare books  in the George Peabody Library in Baltimore, Maryland.  In her publication “Preventing Library Theft,” Audrey Pearson noted:

“…Bland had used a fake identification card to use the library, and had been committing various premeditated thefts, with plans for many more recorded in his notebook. Upon further investigation, Johns Hopkins officials found that Bland had also visited the libraries at {other universities}. Many map dealers around the country had been purchasing the rare maps from Bland for some time, and had acknowledged that they always wondered how he continually had such great inventory… However, Bland had such low prices that most dealers chose not to question his practices… For all of the damage Bland did to libraries, and all of the hundreds of thousands of dollars of theft, Bland was only sentenced to eight to ten months in prison.”

Since that theft in 1995, other maps have been ripped from rare book collections in the United States, and in 2012, thousands of books in Naples’ sixteenth century Girolamini Library were systematically damaged and stolen for sale on the black market.  Donna Leon uses a rare books collection in a prestigious Venice library as the setting for the twenty-third in her series of Guida Brunetti mysteries.   This is my first experience with the expat American author and her hero in crime fighting, Guido Brunetti, Commissario in the Venice police force – how appropriate that the story is about books.

As Brunetti follows leads, including a former priest, an Italian playboy, and a Kansas professor, the murder of one of the prime suspects changes the rhythm of his pursuit.  I am only into the first 100 pages, but am already hooked.

If a mystery could be classified as literary, Leon may have found the formula.  Brunetti is well read and constantly including allusions in his conversation; his appreciation of the beauty of Venice and Leon’s descriptions through his thoughts and observations creates a beautiful backdrop and an appealing counter to the grisly reality of crime and corruption in the city.  At one point, Brunetti reminisces about the time he ran away to work in the fields for a day when he was twelve years old.  Returning home with his pittance wage, his mother asked him if he now realized “how hard a person had to work if all they had to work with was their body.” Lesson learned: “…all you’ll do is work for enough to eat. Even then I knew, I didn’t want to spend my life like that.”

The erudite police commissioner reads English history books at night, has conversations about philosophy with his wife, and stops to smell the Spring flowers on his way to work – all the while using his intellect to solve crimes.  But perhaps his comments on the political realities of the city offer the best insight into his internal struggle – the cruise ships ruining the canals, the corruption of the rich, the influence of the Church…  Brunetti’s character is as fascinating as the mystery he is solving.