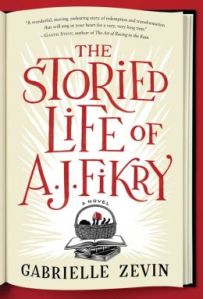 Gabriells Zevin’s The Storied Life of A.J. Fikry vicariously fulfills the dream of many readers to own a bookstore in a small town, where being able to read all day and talk about books, trumps profits.  With clever references to familiar books and pithy quotes from favorite authors, Zevin offers a handy resource of good reads along with a quirky love story that will charm you as she follows a recognizable formula for second chances.

Both A.J. and his wife, Nic, are literary beings who have forsaken the grueling years they could have dedicated to writing their dissertations to open a bookstore in a small town off the coast of Massachusetts, accessible only by ferry. After Nic dies in a car accident, A. J.’s life follows the usual pattern of despair – until two seemingly unrelated occurrences change his life forever: his valuable first edition of a rare Edgar Allan Poe book is stolen, and a toddler is abandoned in the stacks of the store’s children’s books.  Zevin follows up with a slow-moving romance connecting A. J. to a publisher’s rep, a plot twist involving his dead wife’s sister, and humorous episodes as A.J. revels in his new role as father to the precocious young girl left in his store.

The story has the pace and flavor of a “Major Pettigrew” or Beginner’s Greek, with characters who don’t fit the mold and a story line that easily moves from slight mystery to poignant moments and satisfying resolution, with lots of bumps along the way.  The ending is contrived and not as happily-ever-after as you are led to expect, but I enjoyed this fast read about redemption through books – a good one for book lovers.