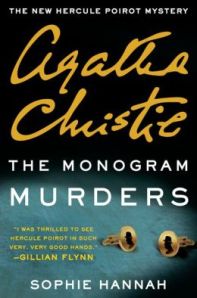 If you are missing Agatha Christie’s Hercule Poirot, Sophie Hannah’s reincarnation of the famous Belgian sleuth  in The Monogram Murders will not disappoint.  In an interview, Hannah, famous for police procedural crime thrillers, noted:

“Try as I might, Agatha Christie is unique. The actual writing style can’t be exactly the same, so instead of trying to replicate it exactly, the way I got around it was by inventing a new narrator… a Scotland Yard detective called Edward Catchpool. He’s a bit unsure of himself, and worries people are going to see through him all the time. He’s the sidekick who’s quite good but he’s nowhere near as good as Poirot. I think readers will like him and identify with him. I did.”

“Nobody has ever written as many enjoyable, fun-to-read crime novels as Agatha Christie. It’s all about the storytelling and the pleasure of the reader. She doesn’t want to be deep or highbrow. So many writers want you to know their world view. Christie doesn’t, she just wants you to enjoy her books. You can be exhausted, have flu, a hangover, you always want to read Agatha Christie.”

I was easily ensconced in the solving of these three murders – dead bodies discovered in different rooms of the same London hotel, each with a monogrammed cufflink placed in their mouths.  The murders take place in 1929, although the motive proceeds from events 16 years earlier. Poirot is in good form – and a comforting element –  as he slowly unravels each clue, commenting in French phrases.  The plot is as intricate and as puzzling as a Christie mystery, and Hannah manages to replicate the old-fashioned style and Poirot’s egotistical manner.  And yet, the story seems to go longer than I remember Christie doing, and the aha element seems a little lacking at the end. Christie always managed to tie up all the loose ends in a final chapter, succinctly and quickly, but Hannah’s resolution meanders until you are wondering if Poirot will ever explain.    Still a good detective story, The Monogram Murders may be more Hannah than Christie, with a visiting Poirot as a bonus.