Inspiring and difficult, Walter Isaacson’s The Code Breaker brought me back to graduate school, but this time the reading was not compulsory for a course, but for my sense of wanting to learn. Science is not my favorite subject; I favor literature, but Isaacson’s conversational style easily led me through the story he wanted to impart.

Although the title identifies Jennifer Doudna as the focus, the book is more than her biography. The subtitle may have been more telling – “The Future of the Human Race.” Isaacson neatly uses Doudna as the fulcrum for the emanating circle of collaborators and influencers in her life and work. I read this book very slowly, trying hard to digest all the information. Despite Isaacson’s easy style and simplified explanations, it still required my concentration and focus. I wanted to understand, and, in the end, I did.

Doudna’s journey as an educator and researcher had some connections that resounded with me, but her level of dedication and enthusiasm clearly soared beyond the norm, and she deservedly won the Nobel Prize. But Isaacson is able to draw out her personal background with arrows pointing to progress and success in her professional life. She is human, after all, and Isaacson does not shy away from her mistakes or misjudgments. Her meeting with James Watson later in life when he is ninety and she is well revered, was poignant; here was the man whose book The Double Helix had inspired her as a girl to study science, yet his prejudices had destroyed his reputation.

Isaacson inserts his own conclusions and predictions in many of the chapters, but especially when discussing the possibility of gene editing, not only for improving health but also for improving the human species. That controversy was paused when the coronovirus took hold of scientists’ and the world’s attention, but it is still there. Dava Sobel’s book review for the New York Times is titled “A Biography of the Woman Who Will Re-Engineer Humans.”

Reading this book in real time has been strange. While reading, Doudna and her collaborators created a test for Covid-19. While reading about her efforts to create the vaccine, I actually received mine. And the news of two women receiving the Nobel Prize made the evening news not long ago. For a while, we all wondered who would win the race – the virus or the vaccine, but Isaacson closes his story saying we should be cautious, slow down, especially with the genetic engineering that helped create those recent saviors.

The book encompasses so many ideas and people, it would take a second read to capture all the details of biotechnology. But I probably won’t read it again – after all, there is no test I need to take on it, and I can always go back to find what I need in its extensive index. It is worth reading at least once, however; the story will leave you in awe and with a new appreciation of science.

Today I heard the beloved Alex Trebeck died, and his biography is in a small pile of books accumulating by my television – all nonfiction. The white book on the bottom is the reverse cover of Woodward’s “Rage.” I am done being angry but don’t want to forget how easy it would be to slide back into that emotion.

Although this is only a sampling of books on my shelves, they are front and center when I watch the news.

I had to admire Peniel Joseph against the backdrop of bookshelves proudly displaying multiple copies of The Sword and the Shield – not the spines, but the covers lined up on a wall of bookshelves behind him, as he discussed the controversy of tearing down monuments with Judy Woodruff on the PBS News Hour.  What great publicity.  Of course, I had to find the book and of course he is the author.

In a review of The Sword and the Shield: The Revolutionary Lives of Malcolm X and Martin Luther King Jr.,  Mark Whitaker for the Washington Post notes:

“Joseph, a historian at the University of Texas at Austin, has made his name studying the Black Power movement and wrote the definitive biography of Stokely Carmichael, the mercurial leader of the Student Nonviolent Coordinating Committee. In turning to King and Malcolm, he ventures into far more densely covered historical territory… {and}  for the most part he smartly zeros in on the relatively brief period during which King and Malcolm actively influenced each other, even if they had no personal contact. It is a fascinating story, full of subtle twists and turns, that unfolded in three phases.”

The New York Times offered an excerpt from the book – you can check it out here.

This might be a good time to revisit their lives by reading the book.

In Deborah Harkness’s Time’s Convert, the appearance of the Marquis de Lafayette and his role in both the American and French revolutions piqued my interest in the French aristocrat who is still revered as a hero in the United States (one of only seven people granted honorary U.S. citizenship) yet denigrated in his homeland of France as a traitor.  With almost one hundred pages of reference notes, The Marquis offers a definitive examination of the man and his complex life.

“The Marquis de Lafayette at age nineteen volunteered to fight under George Washington and became the French hero of the American Revolution. In this major biography Laura Auricchio looks past the storybook hero and selfless champion of righteous causes who cast aside family and fortune to advance the transcendent aims of liberty and fully reveals a man driven by dreams of glory only to be felled by tragic, human weaknesses. “

Auricchio’s narrative is informative and conversational – an easy way to learn history.

The Vanderbilt name carries with it a sense of awe for me.  I’ve heard of the railroad baron who built an empire and had magnificent homes in New York City with a “beach house,” known as The Breakers in Newport.  I know about Gloria Vanderbilt of skinny jeans fame, and her son, Anderson Cooper, the blue-eyed white-haired newsman.  But who was Alva Smith Vanderbilt?

Therese Anne Fowler reveals the story of the outspoken  feisty suffragette married to William K. Vanderbilt,  grandson of Cornelius and great great grandfahter to Anderson. In the first half of her life Alva does what is expected of her, marries into money and society, and works behind the ssenes to assure the Vanderbilt name is synonymous with wealth and power.  But after being betrayed by her husband with her best friend, she divorces William and marries her own true love.  Divorce in the Gilded Age was no small undertaking, but she manages.  Eventually, in the second half of her life, with no husband, she uses her money and influence to fight for women’s right to vote and equality.

Although Fowler’s narrative is sometimes painstakingly slow and the plights of the wealthy seem overbearing, Alva rightfully takes her place among strong women in history. 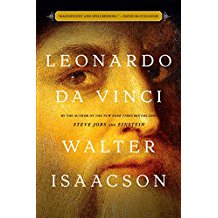 Leonardo da Vinci is my new hero – with unfinished projects,  a stylish fashion sense, and insatiable curiosity about everything.  Walter Isaacson’s biography of Leonardo da Vinci is heavy, not only in the depth and span of its content but also in it actual weight.  Within almost 600 thick glossy pages, Leornardo, his paintings and drawings, as well as his curiosity and genius, come to life. I read them all, and I took notes.

Alexander Kafka’s review for the Washington Post in 2017 summarizes the book’s highlights – How to Unlock Your Inner Leonardo da Vinci – noting:

If Leonardo’s life reads like a wide-screen epic, that hasn’t escaped Hollywood’s attention. Paramount has bought the rights for a movie adaptation of Isaacson’s book with Leonardo DiCaprio playing his namesake. Here is Machiavelli… conniving overtime, working his connections with Cesare Borgia and Leonardo. Here’s Francis I, king of France… finally offering to the artist in his final years the no-strings-attached patronage he’s always sought… it’s a good story…

I look forward to the movie but glad I read the book first.  My notes will remind me of this great genius, a caricature I remember from his portrayal in the movie “Ever After.”  The movie seems to reference many of Isaacson’s notes, especially in Leonardo’s old age, but of course there was more to the artist than on the screen.

From my Notes while Reading, I will Remember:

Leonardo da Vinci was a vegetarian, left-handed, and wrote in mirror script (right to left with his letters backwards to avoid smearing the ink).

He was self-taught and excelled in geometry.

He was the illegitimate son of a notary, but his father acted as his patron into old age.

He was an idea man but his “execution did not go as well as his conception” – lots of unfinished projects.  He planned to write many books he never got around to publishing.

The fresco of “The Last Supper” had deteriorated badly after only twenty years because Leonardo changed the fresco technique into oils on dry plaster; it all flaked away.

Leonardo was a friend of Machiavelli, and his rival was Michelangelo.  When Leonardo was on the committee to approve Michelangelo’s “David”, da Vinci has “a garland made of brass and twenty-eight copper leaves…covering David’s genitalia.  It stayed that way for forty years.”  in the guise of decency.

He was a favorite of the kings of France and retired in the Loire Valley before he died at 67.

And my favorite line at the end of the biography:

“The best way to approach {Leonardo’s} life is the way he approached the world: filled with a sense of curiosity and an appreciation for its infinite wonders.”

In his last chapter, “Conclusions,” Isaacson draws together many of the observations he made throughout the book as he documented da Vinci’s life.  He leaves the reader with a set of maxims to live by.  Here are a few you may want to adopt to release your own genius: