Like catching up on past seasons of Downton Abbey, Fay Weldon’s trilogy focusing on the Edwardian lifestyle of the British is best enjoyed in sequence, without too much waiting in between.  I finished reading Habits of the House, the first in the series, to meet Lord Robert, Earl of Dilberne and related characters who could be the cast of Downton, with only  Maggie Smith’s Dowager Duchess absent; then quickly moved on to Long Live the King, to attend the coronation of Queen Victoria’s heir, Edward, the new king and a friend of the

family.  The publication of the last book in the series – The New Countess – will be in December, with the possibility of a Dowager Dutchess finally in residence.   Downton Abbey, Season 4 begins in January – perfect timing.

The grand Edwardian lifestyle is in jeopardy, and only a marriage with a wealthy American looking for a title can save the British aristocrats from losing the estate, the horses, the servants, and everything else – and modernization lurks in the wings.  Sound familiar?  Fay Weldon, the creator of the beloved “Upstairs Downstairs” series, uses wry humor to poke at the sensibilities and politics of the privileged as well those “in service.”  At times, the lines are blurred and the lady’s maid can be more adamant in maintaining the class structure than the lady of the house. Nonetheless, Weldon carefully inserts her ongoing commentary on the strained politics (Churchill was just a start-up then), as she quietly ridicules the narrow-minded attitudes that can be as rigid as the whale-boned corsets of the times.

The historical references are instructive, and I found myself looking up the Boers War, Queen Victoria’s John Brown, the Vanderbilt connection, and, of course, the succession chart.  In the first two books, the Earl and his family carry on to the early 1900s, with changes in fashion, lifestyle, and politics.  The gossip, however, remains the sustaining and stabilizing force in the stories, along with those wonderfully convenient soap opera scenarios that twist the plot lines: a beautiful young girl saved from a fire becomes a princess instead of a nun and saves the King.

With a little bit of luck and a lot of good writing, all ends well in each of the first two books.  My expectations are high for the third book; if you are a fan waiting for the next season of Downton Abbey, Weldon’s trilogy will sustain you. 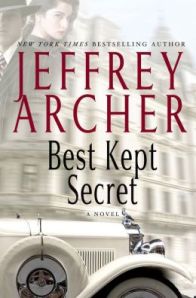 The third book in Jeffery Archer’s saga of the Clifton and Barrington families – Best Kept Secret – resolves the inheritance issues from the second book, and introduces the next generation.  Sebastian, son of Emma Barrington and Harry Clifton, manages to uphold the family drama with his own escapades; one involves  Third Reich money laundered through a South American villain.  Beware – the ending is another cliff hanger, but since the principals of soap operas rarely die, the probable outcome is predictable.

My library request was granted the day before I was to leave on a trip.  Thinking I would savor the easy drama on my red-eye flight, I checked out the “hot pick” (due back in 7 days) – but couldn’t resist and read the book in a sitting the night before leaving.  Fast-paced fun family drama with a few diversions in the simple plotting.  If you are a fan, this book is the midpoint in the series, and Archer doesn’t keep readers waiting long for the next installment.

Be Careful What You Wish For 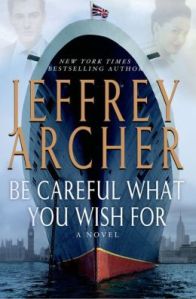 Almost a year later, the next installment of the Clifton Chronicles has appeared, with Harry a successful best-selling novelist and Emma as Chair of the Board.  This time someone significant does die unexpectedly in the middle of the story, but the drama continues as the Barringtons have their first luxury liner ship ready to sail.  The family may narrowly escape a financial destruction but the family nemesis, Martinez, may be leaving behind two sons bent for revenge.  Some of the principals may not survive the final pages with an IRA bomb imbedded in a vase of lilies.    – until the next installment.

Although Archer fills in the back story for those who either have not read the first few books – or for those, like me, with bad memories of who is who, I’m starting to think it would be more fun to read them in tandem – a marathon read that would take one cliffhanger into the next without as much of a wait.  Then I might remember who the good guys and bad guys are.

Reviews for Books One and Two: