Bullies are mean and terrorizing.  Lauren Wolk’s coming of age novel Wolf Hollow demonstrates how ruthless and damaging lies and bullies can be.  Targeted for a young audience, the story’s message is appropriate for adults, reminding them not only of their responsibility to be aware of prejudicial labelling and scapegoating but also of the consequences of intolerance when left unchecked.

Although the story is set  in Western Pennsylvania in 1943, the theme is universal and could be happening today.  Annabelle, a precocious twelve year old who lives on a farm with her brothers and parents, narrates the story.  Betty, the new mean girl at school, who has been sent to live with her grandparents because she is “incorrigible” threatens Annabelle and her brothers; Betty is a “dark-hearted girl,” without morals or remorse, who beats Annabelle with a stick and breaks a bird’s neck.

Toby, the unshaven and tattered reclusive veteran of World War I,  roams the hills with his empty guns on his back; his mental health and morals are suspect and neighbors tolerate him as long as he stays out of the way.  But Annabelle’s mother, as well as Annabelle, see a harmless kind man with scars on his hand from the war, who lives a solitary life recovering from the horrors he faced as a soldier.  When Toby comes to Annabelle’s rescue from Betty,  Betty’s vengeful lies escalate to blame Toby for her own actions when she blinds a classmate and later tries to harm Annabelle’s brothers.

Betty’s determination to frame Toby awakens Annabelle’s protective instinct for the innocent man, and the plot turns into a series of soul-wrenching decisions and suspense as Betty unexpectedly disappears, and Annabelle determines her role in deciphering and exposing the truth.

The action escalates at the end, leading to a jarring but realistic conclusion.  Annabelle learns a lesson many adults are still grappling with:

And I decided that there might be things I would never understand, no matter how hard I tried. Though try I would.

And that there would be people who would never hear my one small voice, no matter what I had to say.

But then a better thought occurred, and this was the one I carried away with me that day:  If my life was to be just a single note in an endless symphony, how could I not sound it out for as long and as loudly as I could?” 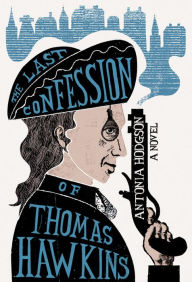 After reading Laura Holson’s New York Times article (..Beefcake Sells…), describing the motivation behind the covers of romance novels, the cover of Antonia Hodgson’s latest book – The Last Confession of Thomas Hawkins – didn’t seem right.  Noted, the book is historical fiction as Hodgson goes to great lengths to document in her afterword, but the hero, Tom, is clearly ripped and lusty.  His bare chest on the cover might attract more readers, and the ripping bodice shenanigans in this story rival those in Catherine Coulter’s Regency romances.

Tom Hawkins returns from his debut in The Devil in the Marshalsea (see my review below) with a few familiar characters introduced in Hodgson’s first swashbuckling romance thriller.  This story has Tom on his way to be hanged for killing his neighbor, Joseph Burden, a horrible bully who tortures his children and rapes his housekeeper, while he is posing as a member of the “Society for the Reformation of Manners,” an eighteenth century group set up as a watchdog for English morals.  Who really killed Joseph Burden becomes a subplot in a tale of intrigue involving Queen Caroline and her husband’s mistress, Henrietta Howard.

According to Hodgson’s research, Howard’s husband was blackmailing the king to keep his mistress a secret.  When the king refused to pay, Howard threatened the queen, and eventually, struck a bargain.  Hodgson uses this obscure historical fact to weave a story around our hero, the rakish Tom Hawkins.  Asked to perform a favor for James Fleet, the “captain of the most powerful gang of thieves in St Giles,” Hawkins finds himself involved with Queen Caroline, who hires him to dispose of the troublesome husband of her lady-in-waiting, Henrietta Howard.   Things do not go according to plan, and Hawkins is telling his tale in his cell before he goes to the gallows – hoping for a last minute pardon from the Queen.

The adventure is fast and furious, with historically correct descriptions of court intrigue, cock-fighting, brothels, executions, and female gladiators.

Review: The Devil in the Marshalsea