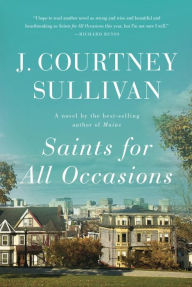 J. Courtney Sullivan’s Saints for All Occasions features two Irish sisters immigrated from Ireland.  One joins a cloistered convent; the other marries and raises the nun’s out-of-wedlock son.  Although their lives seem predictable, Sullivan uses their strict upbringing and their personal struggles to create a family saga across generations.

The story begins with the death of Patrick, eldest son, but his place within the family is quickly absorbed into the estranged relationship of the two sisters. As the story moves between the present and the past, Sullivan follows the sisters as they travel by ship to their new world, and teases the reader with their future lives.  Despite the long descriptions and the choppy dialogue, I kept reading to find out how their lives developed.  How did Theresa become a nun?  How did she get to Vermont? How did Nora have so many children when she had not consummated her marriage after two years?  Sullivan posing possibilities by her glimpses into their future, constantly opening new doors for her characters.

The title refers to a collection of holy cards Nora has kept in a box.  I remember my grandmother’s – bespoke cards for specific requests with the saint’s picture on one side and the prayer of entreaty on the other.  Some have entered popular culture – pray to St. Jude for the impossible or St. Anthony for lost items, but St. Monica as the patron saint for mothers of difficult children was new to me. The cards also include commemorations of the dead, usually distributed at a funeral. I have a stack of those bequeathed to me – some of relatives I barely remember.

For those of us who grew up in the Catholic religion of old and watched as it morphed into modernity, then was crippled by the exposure of priests’ crimes, Sullivan’s references will make a connection.  As the book ended, I wanted more  and realized I had become immersed in the characters’ lives. 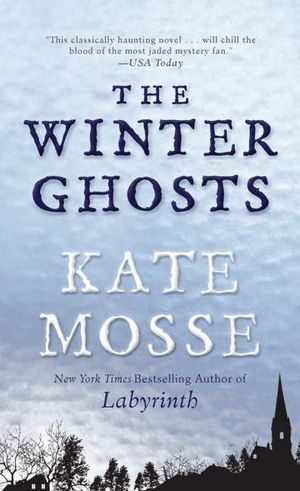 On his twenty-first birthday, six years after the death of his older brother in World War I, Freddie Watson finally succumbs to his grief and goes mad. Years later, released from the sanitarium, as he drives into the French Pyrenees for a holiday, his car crashes in a snowstorm.  He finds shelter in a small village where he connects with his soul mate, a young beautiful ethereal girl, Fabrissa, who disappears after one night.  Is his experience real or imagined? Is he reverting to madness or privy to another world? Kate Mosse’s The Winter Ghosts will immerse you in Gothic romance and mystery, while revealing the commonality of war – whether in the 14th or 20th century.

The story has a maddeningly slow start, with elaborate descriptions and flashbacks. Once Fabrissa appears, the action reverts to ghostly secrets that are not too difficult to unravel, but Mosse offers a different spin on the obvious. 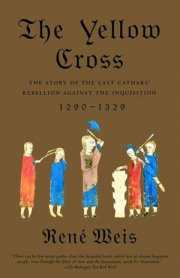 mystery; zealot Catholic Crusaders had the Pope’s blessing to plunder villages and kill, in the name of salvation. When villagers hid in caves in the hills, the soldiers sealed them in with boulders, creating a living tomb. In the story, Fabrissa wears the yellow cross, the Catholic church’s symbol for heretical Cathars; Mosse alludes to the similarity of the labeling of Jews. The historic references led me to explore more about the Cathars, their beliefs and struggle in the Rene Weis book – The Yellow Cross: The Story of the Last Cathars.

Freddie finds salvation through Fabrissa – finally able to lay aside his own torment and ghosts by exposing hers. Although the mystery is easily solved in the first 100 pages, The Winter Ghosts offers more in its historical education, if you know what you are reading. 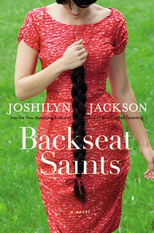 I was taken in by the cover – curvy young woman in a red dress holding a long black braid in her hand.  I was taken in by the book flap – mother runs away; daughter follows. I was taken in by the sweet Southern references.  I was deceived.  This was not the light summer read I had expected.  Joshilyn Jackson exposes abuse and all its consequences on personal and family lives in Backseat Saints, and left me feeling a little raw after reading it.

After her mother leaves, when Rose was eight years old, Rose becomes the substitute target for her father’s beatings.  She grows up feisty, able to shoot a gun, and looking for love in all the wrong places.  After running away at eighteen, and suffering through a series of bad men, she marries Thom, a jealous Texan, who continues the battering and mental abuse she has come to expect.

Jackson exposes the secret side of abuse through the mental negotiations that Rose has with herself – her sweet submissive Southern belle vs. her tough Alabama street-wise handler.  The saints offer another perspective.  Growing up Catholic, Rose has a litany of saints connected to various missions: pray to St. Bartholomew for sports, St. Rita for marriage, St. Roch for dogs  – a saint for every challenge.  The saints, though not very effective, appear beside her in moments of extreme stress to offer support.

After a dire warning from a gypsy in an airport terminal, Rose decides to kill her husband.  She shoots her dog by mistake instead; he survives  – sad but the strange comic relief that Jackson offers throughout the story.  Rose’s wry comments and her quick wit sprinkle the horror.  Eventually, after an almost fatal beating that lands her in the hospital, Rose plans her escape.

But running away from an abusive, vindictive husband is not easy, and Jackson focuses on abused women’s lack of money and means to get away as well as the vacillating emotions that draw them back again and again.  Even the saints can’t help Rose, and all seems lost – until she decides to find her mother.

Rose’s pilgrimage for peace has her looking for her high school boyfriend and her father in a desperate attempt for protection from her husband.  When she is reunited with her mother, it would seem a relief, but Jackson has more to say – this time on mother/daughter relationships.

The ending is a surprise, so I will not spoil it for you.  I read Backseat Saints quickly, happy to get to the end.  One of those books that’s good for you to read; my rating ✓✓✓.
But now I really need some summer fluff to read.

Ever hear the one about the guy new on the job who’s given 3 envelopes by his predecessor to open in times of crisis?

Maureen Dowd makes a good case that the Pope has gone through the first two – might be time for the third.  Check out her New York Times article, “Should There Be An Inquisition for the Pope.”
http://www.nytimes.com/2010/03/31/opinion/31dowd.html?th&emc=th