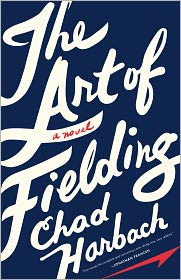 You don’t have to live and breathe baseball to be a fan of Chad Harbach’s The Art of Fielding. You might better appreciate some of the references that Harbach uses, but the nuances are only an excuse to draw you into the game – of life, not baseball.

Henry is small but a talented seventeen year old shortstop from South Dakota, dedicated to his game, and hoping to make it to professional status with the St. Louis Cardinals. Mike Schwartz, a sophomore at a small prestigious Michigan college and catcher for the school’s baseball team, recognizes Henry’s talent when he sees him playing a high school game, and Henry’s path to glory begins.  Schwartz convinces the college to give Henry a scholarship and mentors him into a career that eventually attracts the pro scouts. At the game that has Henry tieing the record of his baseball hero, fictitious Hall of Fame shortstop Aparicio Rodriguez (possibly a reference to Venezuelan Luis Aparicio), the ball deflects off his mitt into the face of his fellow teammate, Owen – sending Owen to the hospital.  And the real game begins.

Baseball ties the characters together as the story follows the team to the final championship.  Harbach compares Henry to Yankees shortstop Derek Jeter, but when Henry begins to think too much about catching and throwing the ball, his dazzling career seems to be over.

Harbach creates characters that are destined for success, yet they never seem to grab that brass ring.  Each has a story of amazing luck and talent, with Henry as the focal point.  Schwartz, the captain of both the football and baseball teams, the catalyst for team spirit and pseudo-father to his buddies, is unable to envision life after college sports. The college President, Guert Affenlight, a former Harvard English professor, struggles with his closeted homosexuality and his estranged relationship with his daughter.  Owen, known as Buddha to his teammates, is Henry’s gay roommate and Affenlight’s lover.  As he offers wisdom and a conscience to others, he remains detached from participation.  Pella, the President’s daughter, who dropped out of high school a few credits short of graduating to elope with an older man, has returned to live with her father and begin again.

If you know baseball quirks, you will recognize the familiar superstitious rituals – growing a beard, tieing and retieing shoelaces, kicking a spot on the instep – but Harbach also uses literary references to foreshadow some of the action as well as confirm the characters’ state of mind: Henry’s obsession with Aparicio’s guidebook – a list of ambiguous entries on improving life through baseball; President Guert’s dream of a Franzen-like solitary cabin with no distractions for writing his next book; Pella’s

dropping her book by Murakami on the soccer field.  Melville’s Moby Dick works as a pervasive and foreboding harbinger in the story.  As an undergraduate at Westish College, Guert uncovered original note pages written by the famous author.  The discovery eventually changes the direction of Guert’s life, and becomes an excuse for the college’s mascot – the team is named the Harpooners and Melville’s thoughtful statue overlooks the lake.

The book ends a few times  – with the resolution of the final game, the convenient exit of Guert’s embarrassment, Pella’s tribute to her father –  Harbach is determined to tie all the loose strings and foretell the characters’ futures, and you will be glad he did.  And Henry shows he still has “the stuff” in the end.

Like a baseball game, The Art of Fielding has unpredictable moments, and I came away with a satisfied and hopeful feeling.

“Poets are like baseball pitchers.  Both have their moments.  The intervals are the tough things.”             Robert Frost

This year’s World Series has had more than the usual drama.  The Cardinals lost to the Rangers in the fifth game, blaming faulty phone lines and hard of hearing receivers relaying miscommunication.  The sixth game of the World Series was a nail-biter.  The 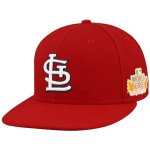 Texas Rangers and the St. Louis Cardinals went into overtime.

The Rangers were ahead twice with two runs; the Cardinals came back both times to even the score, and then the home run that won the game in the eleventh inning.

The excitement was catching, and I’m a Phillies fan!

Despite the drama, I started a new book while watching  – a book with a baseball theme seemed appropriate  – Chad Harbach’s The Art of Fielding.  On the second page, Henry, a seventeen year old shortstop with loads of potential “swapped his green Legion cap for a faded red St. Louis Cardinals one.”  An omen?

“Henry imagined the same scenario as always: he was playing shortstop for the St. Louis Cardinals in Game 7 of the World Series…ahead by one, two outs, bases loaded.  Make the last play and win it all.”

I had to stop reading to concentrate on the show.   In my real time, it’s the fifth inning in the seventh game, and the Cardinals really are ahead by one.

At last – the seventh game is history and the Series is over.   Now I can get back to my book.