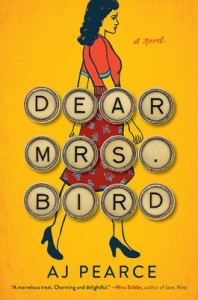 When I heard The Guernsey Literary and Potato Peel Society book was soon to be a movie, it motivated me not only to read the book again but to read Dear Mrs. Bird, a book with a similar vibe. The books have a lot in common – letters, Britain, World War II, romance, and characters I would pick as friends.

Young women in Emmeline Lake’s time usually tried to keep busy until they were married, and her best friend and flat mate, Bunty, does just that as she works as a secretary in the war office.  But Emmy has hopes of becoming a brilliant journalist and when she answers an ad for The London Evening Chronicle, she expects to be on her way to war correspondent.  To her surprise, the job is no more than typing for the paper’s Dear Abby, a huffy overbearing woman who would rather cut up letters sent to her than respond.  Her advice, when given, is harsh and unforgiving – not at all as sympathetic as her readers’ hopefully expect.

As Emmy begins to surreptitiously answer some of the more earnest enquiries, she gradually moves the advice column into a better place, until she gets caught.  The story includes vignettes of romance and correspondence with a promising beau and Emmy’s erstwhile social life, but Pearce does not shy away from describing the horrors of the bombing in London.  She deftly weaves the characters’ strength into a frivolous plot as they bravely survive everyday in a blitzed city while managing to keep hope and aspirations alive.

If you enjoyed Guernsey and other similar books (The Storied Life of A.J. Fikry, 84 Charing Cross, The Summer Before the War), Dear Mrs. Bird will be a pleasure to read.