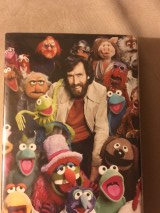 The Muppets and Sesame Street saved me as a young mother.  If I nodded off from exhaustion with a toddler in my grasp, I knew friendly Grover would always be there to demand and get her undivided attention.   Although their creator, Jim Henson, died suddenly in 1990, he seems to be still around.  Miss Piggy still shakes her curls, the Count still guffaws,  Cookie Monster still devours – even Kermit, who was voiced and operated by Henson himself, still philosphizes.  In his biography – Jim Henson –  Brian Jay Jones reintroduces Jim Henson with all his quirks and weaknesses, as well as his extraordinary talent and playful way of looking at life that changed the world for many of us.

Being a little preoccupied with death lately, I started with the last chapter titled “Just One Person, 1990,” addressing Henson’s short illness, and including a memorial service he had outlined in a letter to his children four years earlier.  His trademark whimsy permeated the grief.

Backtracking to  Chapter One, I followed Jones’s easy conversational writing about Henson’s childhood and the beginning of his career in his college days at the University of Maryland, the Muppets’ big break on Steve Allen’s Tonight Show,  and the first Muppet commercial – for coffee.  Henson’s “ridiculous optimism” was catching; it was impossible not to like him.

Henson was more than Sesame Street, yet educational television eventually defined his art, as he eschewed commercials  to focus on the show that would make his Muppets household names.  Jones follows the family brood – Henson had five children – as they moved into bigger houses and followed the patriarch’s dream, but he follows the Muppet family more closely, outlining in detail how each puppet was created and evolved.  Each success and failure is carefully documented, from Fraggle Rock to Labyrinth.   Only the two sets of pictures inserted in the narrative give some relief from the exhausting details, but the few personal glimpses behind Henson’s calm demeanor were worthwhile.  When his success allowed him to wear bespoke suits so his pants would be long enough to hide his calves when he crossed his legs in a television interview, he became even more endearing.

Jones focuses on Henson’s creative life more than his personal; his separation from his wife has only a paragraph in the book, and his later relationship with Mary Ann Cleary was given scant attention.  Jones affirms his view of Henson as a family man – with five children and dogs, even after his marriage fell apart – and his family of Muppets.

“…I’ve got a dream, too.  But it’s about singing and dancing and making people happy.  That’s the kind of dream that gets better the more people you share it with. And, well…I’ve found a whole bunch of friends who have the same dream.  And it kind of makes us like a family.”

A wonderful testament to the Kermit inside the man, Jones’ biography includes a picture of Henson as he manipulates Ernie.  Even then, it’s hard to believe Ernie is only an extension of Henson’s arm.  The muppets always seem so real.