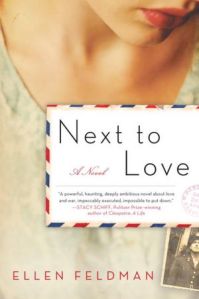 Ellen Feldman’s novel Next to Love could have more appropriately been named “after the war” as she examines the lives of three American women whose men served in World War II.  As the story slowly develops from 1941 t0 1964, their lives in a small Massachusetts town become the microcosm for military families coping with the effects of war’s loss and trauma.   Although the catalyst is World War II for Millie, Babe, and Grace, some of the personal applications could still be true today as embattled men return from war zones.

Best friends from childhood, the three women sustain their connection despite their different backgrounds and the men they marry.  At first the story has some of the flavor of Blake’s The Postmistress and Shaffer’s The Guernsey Literary and Potato Peel Society.  If you liked reading those books, you will probably enjoy this one.

All three women have recognizable characteristics that type them, and Feldman neatly uses these to weave in the prejudices of the times as the years unfold: women forced to leave jobs for returning GIs, Jews kept from buying into elite neighborhoods or joining country clubs, the brewing Civil Rights unrest.  The focus, however, always returns to the personal relationships – the sustainability and changing nature of love in marriage and how war changes everything and everyone.