The title of Catherine Steadman’s The Disappearing Act appealed to me. Like Maria Semple’s “Bernadette,” sometimes disappearing seems promising. But Steadman is the author of the thriller “Something in the Water,” soon to be made into a Reese Witherspoon movie, so I expected a page-turning drama. The Disappearing Act focuses on a story closer to the author’s alter ego as an actress in London, and the “gaslighting” will have you wondering who the villain really is.

After Mia’s live-in boyfriend surreptitiously dumps her, she leaves from London to Hollywood for a series of auditions, following her successful portrayal of Jane Eyre and her nomination for the prestigious BAFTA award. In the waiting room of one of these auditions she meets Emily, another actor, and the plot thickens.

Returning from putting money into the meter for Emily’s car, Mia finds Emily has left, without her wallet and car keys, and she is determined to get them back to her. A series of plot twists ensue, with the punctuation of a new love interest, a handsome and wealthy producer who meets her when she is plugging the meter. After a series of unsettling incidents – someone breaks into her apartment, her car is mysteriously sabotaged, threatening notes appear – Mia is not sure who to trust. Steadman keeps the plot moving in different directions, until finally resolving the obvious.

The Disappearing Act is a fun and quick read – just the kind of story to distract and entertain.

I almost forgot I ordered the two books from Libby, the library’s email guru, but they both appeared together and both due in less than 21 days. I better get reading:

Any suggestions on which to start first?

My good friend sends me clippings from civilization (Maryland and Massachusetts) with stories about authors and books – she knows my proclivities well.  Recently, she informed me of the seventy-fifth  anniversary of Robert McCloskey’s Make Way for

Ducklings, reminding me of the Public Garden in Boston where children clamber over the duck family.

Curious George is also celebrating his seventy-fifth anniversary, and Alison Lobron of the Boston Globe bemoans his descent from scary to safer adventures over the years in Incurious George Finds a Safe Space.  When the original authors, H.A. and Margaret Rey, wrote , the stories were scary – about the little monkey breaking his leg when chased by grown-ups or being “snatched from his home in the African jungle.” In the late twentieth century, George’s publishers turned him into “a good little monkey” with shorter adventures.

My pile of clippings also includes a few places I’d like to visit.

A Library in a Phone Booth 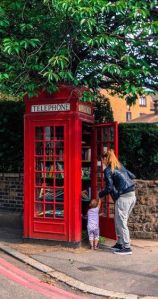 Although some of us wish cell-phone booths would become popular (Cell-Phone Booths? They’re For Real), the old fashioned phone booth is hard to find today – unless you are looking for a small  library or a coffee shop. In her article for Bloomberg, Lisa Fleisher describes the trend to turn old British red telephone boxes into lending libraries in Phone Booths Find Their Second Calling, and includes a picture of an ardent borrower at the children’s collection.

Elizabeth Warkentin described Dahl’s Gipsy House in Great Missenden, England in A Phizz-Whizzing Visit to Roald Dahl’s House.  With its bespoke writing hut, birdhouse with window ledges lined with “dream Jars” (from the BFG), and lush gardens, Dahl’s country home from 1952 until his death in 1990 welcomes readers.  The town has the Roald Dahl Museum with interactive exhibits and snacks for the hungry – Bogtrotter cake with smarties and marshmallows.

My good friend also sends clippings with background on  authors of recent books – Amor Towles (A Gentleman in Moscow); J.K. Rowling (Harry Potter and the Cursed Child) – but more of those later.  My clipping file runneth over…

one I remember rereading over and over. Best known for her children’s books including Little Lord Fauntleroy and The Little Princess, Hodgson was also a prolific writer of adult books. When I recently read a review of Hodgson’s 1896 book, The Shuttle, and found I could download it for free, I finally found a way out of my reading slump.

Because The Shuttle focused on the lives of two sisters who would have lived in Hodgson’s time, I was anxious to know more about the author herself, a woman who like some of her contemporaries (Louisa May Alcott) actually supported herself by writing. Just as Little Lord Fauntleroy had shades of her two young sons whom she kept in long curls, Hodgson’s shuttling between America and England, and her second husband’s reliance on her income may have influenced this book.

Although the text is long and the plot complicated, like other Hodgson books, the story combines history with romance and adventure. Rosy marries an Englishman (the villain), who needs her fortune to shore up his aristocratic life and Betty is the sharp younger sister who is determined to outsmart all those Victorian men who would keep her from her potential.  Twelve years after newly wed Rosy left for England, a grown-up and self-possessed Betty sails to find her sister at the run-down mansion, struggling to survive with her hunched back son, while her erstwhile husband is off spending her fortune on himself.

Despite long descriptive passages of the countryside, the drama held my attention, with the strong female heroine fighting against the surly despicable villain, while restoring the village, the English garden, and her frail sister.   The tall beefy red-headed lord of the neighboring manor helped too. Like watching an old black and white movie, reading The Shuttle was a treat and a comfort.

When Eric Weiner described “thin places” in his New York Times article Where Heaven and Earth Meet, he reflected on travel to places “where {he} could breath again… and became {his} essential self.”  He listed bookstores among such enervating sites, and his mention of Powell’s Book store in Portland, Oregon, reminded me of my good intentions to get there someday.  Have you been there?  Bought a book there?

Rereading the 2012 article gave me some perspective on my own recent travels.  According to Weiner, thin places cannot be planned; they just happen.  Although escorted tours come with expectations,  those unexpected moments – usually alone – make the fulfilling connections.    I’ve found thin places when I wasn’t looking: my early morning walk in England’s Lake Country among the ferns and babbling brooks; my awe at the vastness and the color of the glacial lake in Canada as the sun rose over the mountain;  a bulldog sleeping peacefully outside a country store in Wales; a fireplace in Alberta as the snow quietly fell outside.

Some thin places have been closer to home: the quiet of the Pacific Ocean before dawn as I walked along a seawall, a deserted park before crowds of walkers took over the paths.

“Travel, like life, is best understood backward but must be experienced forward…”

reminded me how often I did not appreciate where I’d been until later – when the memory of beauty or quiet sustained me in a harried world.

Where have you experienced “thin places”?

Sisi, Empress of Austria, often compared to the late Princess Diana of England, is the

focus of Daisy Goodwin’s historical fiction The Fortune Hunter.   When I realized this controversial historical figure was the same woman whose elegant posture and heavy hair, crowned with diamonds, graced the museum I had visited in Vienna, I found renewed interest in the tale, despite the sometimes halting period prose.

Goodwin bases her story on real people living during the reign of Franz Joseph in the 1860s, including the hero and namesake of the novel, cavalry officer and horseman, Bay Middleton, who actually “piloted” the empress  through the English hunting seasons for five years.

Goodwin manages a contrived happy ending for all , except the unfulfilled Sisi, who remains one of the most magnetic characters in history.  If you enjoy historical fiction, the novel offers information and a glimpse into the world before World War I, when wealthy women used raw veal for their complexion and royalty, including Queen Victoria, still demanded backing out of a room in deference.