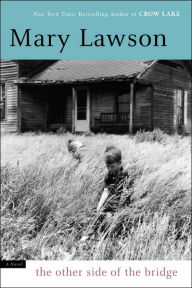 Steadily and quietly, Mary Lawson affirms the continuity of life in the remote Northern Canadian town of Struan in The Other Side of the Bridge.  Despite the hardships of severe weather, the war, farm life, and the love/hate relationship of two brothers, the strength and forthrightness of its people forge a universal tale, with suspense and romance, guaranteed to keep you riveted to the page.

Across two generations, Lawson examines the relationship of two brothers, Arthur and Jake Dunn, growing up on a farm in the 1930s before the war.  Ian Christopherson, a smart high school student and the son of the small town doctor, connects to the brothers twenty years later when he gets a summer job plowing the Dunn farm.  By alternating across time zones between Ian’s story with Arthur as a grown man with three children in the present and Arthur’s life as a boy in the past, Lawson cleverly manages to maintain suspense – despite the reader knowing some of how the story will turn out.

The three main characters each follow a predictable type:  Arthur is the good but slow, plodding older brother who prefers plowing behind the horses to doing schoolwork; Jacob is the diabolical  younger, smart, handsome rake who can charm anyone; Ian is the love-struck adolescent, scarred by the desertion of his mother, who chafes at the town’s expectations to follow his father’s footsteps as the town’s next doctor.  After establishing the stereotype, however, Lawson breaks the mold for each of them.

The best part of reading one of Lawson’s stories is getting to know her characters.  After awhile, they become so real, you will be engulfed in their lives and feel their insecurities as your own.  Although the outcome of Ian’s struggle to grow up is predictable, how he gets there is still satisfying.  The constant sibling rivalry between Art and Jake fuels the plot, providing some moments of humor, but more often an anxious recognition of their competition for their parents’ love and their understanding of each other.

Lawson punctuates her storytelling with shocking incidents –  tragedy, resentment and betrayal, but in the end decency and goodwill win out – with humanity pulling all the story threads together.

The Other Side of the Bridge had the well-deserved honor of being long listed for the Man Booker Prize in 2006.