In Joseph Finder’s The Fixer, Rick Hoffman finds a pile of hundred-dollar bills – over three million dollars – in the crawl space of his father’s old house in Boston.  With this electrifying premise, Hoffman begins a tale of corruption and undercover payoffs connected to Boston’s Big Dig.

Rick, an investigative reporter who has just lost his job, while happy to find the unexpected windfall, suspects his father, now paralyzed by a stroke, could reveal the secrets behind the mystery – if only he could speak.  As he investigates his father’s past, Rick discovers a crusading attorney who helped the underdog but who also funded his pro bono cases with laundered money from illegal sources. Rick’s father was the “fixer,” a go-between who was rewarded with cash.

The story has frantic moments, red herrings, and enough plot turns to sustain the suspense but I found myself just wanting to know “how the story ends,” and skipping over extraneous dialogue and irrelevant descriptions.  The big reveal included a happy ending, with the good guys getting the bad guys.

A fast summer read full of dirty money and atonement – The Fixer was a fun way to pass the time.  Maybe it’s time to clean out the attic – no telling what is in there.

Clever and suspenseful, with surprising twists mimicking Redford and Newman in “The Sting,” John Grisham targets the federal law enforcement system in his latest legal crime thriller – The Racketeer.

After serving five years of a ten-year sentence, Malcolm Bannister, a lawyer convicted for a crime he did not commit, creates a convoluted scheme to be released from prison.  By revealing the identity of the murderer of a federal judge, Bannister trades information to the FBI for a new face, a stash of new funds, and a new life.  But Grisham has not maintained his place on the bestseller list by creating simple stories, and all is not as it seems.  As the action unfolds, you will not be sure who the real criminals are – until the very end when Grisham reveals all.  A fast-paced thriller not requiring much serious thought, The Racketeer is another fun Grisham ride. 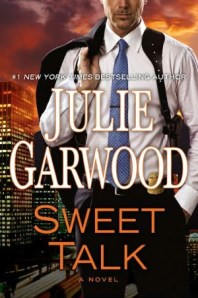 Time for a change of pace – frothy romance with some detective work and a mystery – Julie Garwood’s Sweet Talk is a hot pick at my library – easy to read in one of those 24 hour readathons.

What a match – Olivia, beautiful IRS agent with a past and a scheming rich and crooked father; handsome FBI agent Grayson “who was as comfortable tackling thugs as he was socializing with the rich and powerful.”  They connect when Grayson comes to her rescue when she is attacked by another powerful villain in an upscale restaurant.  After Olivia is shot by a mysterious assailant, the search in on – to protect – and to fall in love.  Great fun – easy and fast read.