Have you ever dreamed of driving off into the sunset, changing your name, and disappearing?  In Vendela Vida’s The Diver’s Clothes Lie Empty, a theft in Morocco triggers a series of identity swaps for an American tourist.

Using the mysterious and exotic setting of Casablanca and focusing on all travelers’ paranoia of losing valuables (Rick Steves’ hidden security pouch sells well), Vida slyly manipulates the story line, drawing the reader into seemingly innocuous events.  The thirty-something woman (we never do know her real name) morphs from a harried Florida traveler on an economy trip to staying at a posh hotel as Sabine Alyse, when the local police replace her stolen backpack with someone else’s.  Her adventure continues when she is tapped to be a stand-in for a famous American movie star who is filming at the location.  A final bus trip out-of-town reveals her true identity when fellow Floridians on holiday recognize her – the past is hard to escape.

The reason for her trip remains unclear until the end, when her dark secrets are revealed.  I didn’t see it coming, and I won’t spoil it for you, but the reasons for her erratic behavior are not jet lag.

An article in the LA Times “Book Jacket” – Florida School Nixes John Green’s ‘Paper Towns,’ Prompts Outcry–  reporting on the book banning of this young adult mystery in Orlando, Florida, had me searching for the book.  Although I have avoided John Green’s much touted The Fault in Our Stars – too sad – I have liked the author ever since I saw him interviewed on the Colbert Report.

I am number 10 on the wait list at my library – so someone must be reading this book.  Have you?

Library Summary:
One month before graduating from his Central Florida high school, Quentin “Q” Jacobsen basks in the predictable boringness of his life until the beautiful and exciting Margo Roth Spiegelman, Q’s neighbor and classmate, takes him on a midnight adventure and then mysteriously disappears.

The suspense is delicious in Anton DiSclafani’s coming of age tale The Yonahlossee Riding Camp for Girls.  Thea Atwell has been sent away from the family’s Florida orange groves to a girls’ boarding school in the Appalachian hills because of a scandal  that stays secret until the reader is hooked and well into the middle of the book – no spoilers here.

The story moves back and forth from fifteen year old Thea’s new life among a group of girls – the horsey set at an exclusive boarding school – and her old bucolic life with her twin brother Sam, her pony Sasi, and her poor relation, cousin Georgie.  As Thea tries to adjust to her new surroundings among more girls her age than she has ever seen (she’s been home-schooled by her father), DiSclafani teases the reader with flashbacks to a gentler time back on the farm – before teenage hormones took over her life.

DiSclafani sets the story just as the Great Depression begins to affect all those wealthy family with daughters in boarding schools.  As the economy worsens, so do the lives around Thea: her uncle loses his house to foreclosure in Miami; philanthropists stop donating to the boarding school; and some girls are forced back home because their parents no longer can pay the tuition.  The world of debutante dances and the money class is shaken.

Horses play a major role in Thea’s life; her daring and proficient skills place her in the advanced riding class.  At the end of the summer, she stays on; Thea’s parents do not want her to come back home.  Letters from home are scarce – alluding to the incident and its consequences.  Eventually, the secret is revealed, but Thea continues to attract trouble as DiSclafani carefully rounds out her main character as a strong-willed yet vulnerable target, who inadvertently succumbs to feelings while looking for love.

A mix of family secrets and illicit romance, The Yonahlossee Riding Camp for Girls is not targeted to a younger audience – the sexually explicit scenes would raise the rating to R –  yet NPR’s Mary Pols notes:

“{this} painstakingly constructed ode to a young girl’s sexual awakening — {is} just ladylike enough to be more bodice unbuttoner than bodice ripper… perhaps one of the classier books a young teen would hide under her covers to read with a flashlight.”

A page-turner that kept me riveted…

If you are still alive after being bitten by a turtle, swamped by an alligator, and infected by a bat – can you call yourself a survivor?  In his fourth book for younger audiences –Chomp – Carl Hiaasen uses his irreverent comedy in his favorite Florida setting to have some fun with arrogant reality show hosts while delivering a campy tale of a young boy’s defining moments in growing up.

Derek Badger (real name – Lee Bluepenny) is the star of a reality television show that has stunt men performing his harrowing escapades, while he secretly eats eclairs out of  camera view. Mickey Cray and his son Wahoo (just like the fish) are hired as animal wranglers to provide alligators, snakes, and snapping turtles from their trained cadre to simulate the wilds of the Everglades for a show.  Hiaasen offers laugh out loud experiences that have the television star showing off his ineptitude with Alice, the chomping alligator and other assorted wildlife.

When Tuna (yes, another fish), a young girl and classmate of Wahoo, runs away from her abusive father to join the Crays on location, the action takes a serious turn – especially when Tuna’s father shows up with a gun.  The wild chase scenes with shootings, mosquitoes, and poison ivy create suspense, but the laughs are never far off.

Although Hiaasen targets a young audience for this weird tale, adults will catch the allusions and laugh louder. 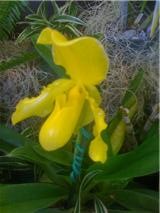 Orchids seem to be easier to find in Hawaii, and the annual orchid show elevates them to art. 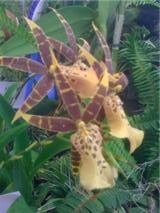 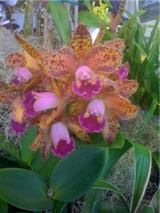 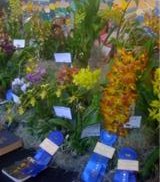 Each one a winner.

The dedicated local orchid growers were not as fanaticical as

John Laroche in Susan Orlean’s The Orchid Thief – but those orchids were from Florida.  Hawaii’s Kaimuki Orchid Society show offered a variety of starter plants, but I demurred and did not succumb to orchid fever – might be time to reread the real story of those passionate orchid collectors.