With gentleness and respect, Kent Haruf’s Benediction examines ordinary lives in the small town of Holt in Eastern Colorado. Although this is the third book in his trilogy, following Plainsong and Evensong, this story stands on its own. Steeped in sadness with its focus on terminally ill Dad Lewis, Benediction offers insights not only into the examination of life as it ends but also into the perception of its effects on others.

With simplistic language reminiscent of Hemingway and a homespun quality bordering on Garrison Keillor or Thornton Wilder, Haruf methodically records the thoughts and language of his characters. As Dad physically deteriorates, life in the little town goes on; the characters revolve around him but simultaneously keep spinning in their own orbits: Dad’s forbearing wife, Mary; his daughter, Lorraine; his long-lost homosexual son, Frank; the salesmen at his hardware store; the firebrand minister and his family; the grandmother next door, caring for her recently orphaned granddaughter; and two towns women – two good souls among some not so tolerant. Each has fears, concerns, inner demons – revealed through Haruf’s subtle interactions – yet, through Dad, their best selves come to the fore, for him and for each other. Conflicts are not always resolved, as in real life, but life goes on – the “precious ordinary.” The death of Dad comes, but the characters and their inner battles live on – maybe for another book.

Although Kurt Haruf’s Benediction is a beautifully written testament to ordinary people, it is a difficult book to read – especially if you have a parent or loved one who recently died. Knowing the sad focus of the book kept me from reading the story for a while, even after I had downloaded it on my Kindle for a recent trip. Eventually, after reading reviews and one particular reviewer who returned to read one of Haruf’s other books in the trilogy, I decided to try. After the first 100 pages, I was hooked on the language and invested in the characters. The terminally ill father was actually a subplot – one of many on the journey of life. Haruf’s last pages, describing the death scene, however, are honest and thoughtful – but no less easy to read. Have your box of tissues nearby. 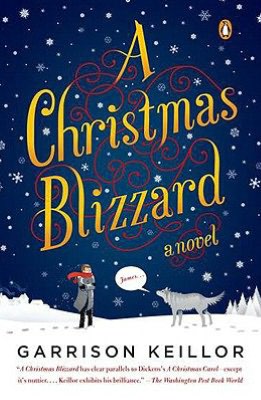 Not willing to let the Christmas spirit dissipate, I looked to a friendly curmudgeon to keep the fires burning.  Garrison Keillor’s A Christmas Blizzard could become my required annual reading – a modern and funny replacement for “The Christmas Carol.”

Grounded by a blizzard in Looseleaf, North Dakota, his old home town  – on his way to his ocean-side estate in Kauai – James Sparrow, a self-made billionaire, decides to avoid his family and spend Christmas in cousin Floyd’s

ice-fishing shack on the frozen lake.  As the night progresses, he meets Ralph, his dead boyhood friend, who appears as a wolf to guide him through the night.  With a tip of his hat to Dickens, Keillor has Sparrow continue the night, trying to cure his neuroses, while dealing with an assortment of unworldly characters: an old woman with wild hair who gives him twenty-four hours to get his act together,  Cousin Liz who invites him to jump into the frozen lake with her – naked – curing his fear of frozen pump handles, and a wise Chinese man, who shows him the way…

Sparrow suffers through a family Christmas dinner – you might want to skip most of this – that climaxes when the undercover FBI agent, masquerading as Liz’s husband, pulls out his gun.   Mrs. Sparrow arrives in the nick of time to provide an unusual escape.

Like Scrooge, Sparrow has his epiphany, and his world is better for it.

If you appreciate Keillor’s brand of wit, and can gloss over his many run-on sentences to pick out his creative politically incorrect skewed commentary, this story will have you laughing; if not, you might want to stick with Dickens.