The Norton Anthology of English Literature celebrates its fiftieth anniversary this year – now in its eighth edition and in paperback.  Do you still have that mammoth hardback book from your college days? in your bookcase? as a doorstop?  Mine traveled across an ocean, before being donated to make room on a small bookshelf.  Founding editor, M.H. Abrams and current editor, Stephen Greenblatt, discuss the relevance of the tome still used in introductory college literature classes in a short article in the New York Times book review section – Built to Last.

When asked why anyone should study literature, Abrams answered:

“Ha – Why live? Life without literature is a life reduced to penury. It expands you in every way. It illuminates what you’re doing. It shows you possibilities you haven’t thought of. It enables you to live the lives of other people than yourself. It broadens you, it makes you more human. It makes life more enjoyable…much more worth living.”

As an English literature major, my collection went on to include many of the authors sprinkled throughout – a taste of writing from Chaucer’s Canterbury Tales to Shakespeare to Joseph Conrad in the twentieth century.  So, of course, I agree with Abrams.  How about you?

With daily news of the world literally falling apart – tsunamis, earthquakes, tornadoes, flooding –  it’s easy to feel sympathy for those in the midst of the catastrophe, but hard to imagine what it would be like to experience it. 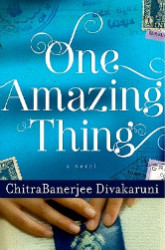 Chitra Banerjee Divakaruni invites you to be in the middle of an earthquake in One Amazing Thing, with nine survivors suddenly trapped in the basement of the Indian consulate visa office of an American city.  With the ceiling collapsing, the one way out blocked, and water slowly filling the room, a range of emotions surface –  fear, regret, and hope.

Among the survivors is Uma, a graduate student, inspired by the copy of Chaucer’s Canterbury Tales in her backpack, who suggests that each tell a personal tale, to distract from the crisis.  Here the real story begins, and the characters change from a list of names to lives with pasts that include “wars, betrayal, seduction, death.”

The group bonds through the stories, and this is an easy read – but be prepared, the ending will leave you hanging.   Might be a good candidate for a book club discussion.