Throughout Wyl Menmuir’s short novel – The Many – Gothic undertones play on scenes full of dark and murky possibilities.  A sense of foreboding permeates the narrative, and Daphne du Maurier’s Cornwall with an abandoned house on the coast helps to set the scene.

The narrative alternates between the two main characters: Ethan, a local fisherman, and Timothy, an outsider who is renovating the old house left empty by the death of Ethan’s friend Perran for ten years.  Each character is battling personal demons, and as it progresses the story evolves into a fable with strange symbolism.

Death and grief figure prominently – the death of Perran, leaving a hole in the fishing community  so large the inhabitants fight to preserve his memory yet refuse to talk about him to Timothy – even resenting Timothy’s attempts to restore his old house.  When Timothy’s struggle with the death of his infant son surfaces later, with obscure dream sequences and haunting memories, the story falls away and changes – just like the flooding sea overtakes the village in the end. Suddenly, the reader must rethink the meaning of everything – the dead fish killed by chemicals, the blockade of large ships circling and imprisoning the cove, the mysterious woman in the gray suit who patiently watches from afar.  Are they more than they seem?  What do they represent in Timothy’s mind?  What is their connection to his solitude and his haunted existence?

Timothy struggles with the question the villagers do not want to hear or answer – “Who is Perran?”  And, the unspoken question – Why did he die?  When the name of his dead son is revealed, the reader cannot help but wonder if the village and the broken house were all a reason for trying to explain the unexplainable.

The Many is a gripping story, but the questions it raises and leaves unanswered could provoke a lively discussion, and the reader may need to reread this short book several times before getting close to understanding all of its complexity. 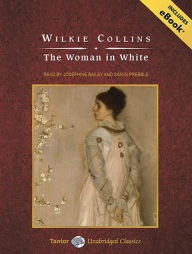 When one of my book clubs identified Wilkie Collins’ nineteenth century classic mystery The Woman in White for discussion, I looked for another way to reread the famous story and found the four hour BBC radio dramatization on Audible.  With rich British intonation, the dialogue kept me immersed in the plot, most of which I had forgotten since reading it for a college literature class.

A detective story with Gothic overtones, the story has an other worldly tone as the reader tries to discover the secret of the ghostly woman dressed in white. In her review, Camille Cauti cleverly summarized the plot without revealing too much for readers who want to thrill to its twists – either again or for the first time.

The story begins with an eerie midnight encounter between artist Walter Hartright and a ghostly woman dressed all in white who seems desperate to share a dark secret. The next day Hartright, engaged as a drawing master to the beautiful Laura Fairlie and her half sister, tells his pupils about the strange events of the previous evening. Determined to learn all they can about the mysterious woman in white, the three soon find themselves drawn into a chilling vortex of crime, poison, kidnapping, and international intrigue.

The father of the detective novel and a contemporary of Charles Dickens, Wilkie Collins was the first to transform a sensational crime story into a tale with clues the reading audience could follow.  When it was first published in 1860, the book was serialized, and according to mystery expert Charles Silet, readers enthusiastically started  a Woman-in-White craze “which gave rise to a popular song, a dramatization of the novel, and even prompted women to dress in white.”

I throughly enjoyed listening.  The music heightened the suspense, and the characters’ intonation made the complicated plot easy to follow.  I’ll look for another book performed by this talented group of British actors.

Having liked The Forgotten Garden, I decided to check out Kate Morton’s first novel, The House at 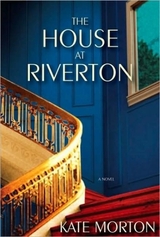 Riverton.   Maybe the success of the second – making it to the NY Times best list – would rub off – like other authors who have the second hit, and then have readers backtrack – like Dan Brown’s Digital Fortress, John Grisham’s A Time to Kill…

Morton’s first novel has her familiar penchant for secrets, as well as her Gothic style.   The characters reveal themselves more slowly in this one, and the story seems a cross between The Thirteenth Tale and Atonement.

Grace is 98 years old when she is interviewed for a documentary about Riverton, the house where she served as a young maid for Hannah, daughter of a wealthy and established family in pre World War I Britain. From casual conversations, it’s clear that Grace has had a good life since then, and yearns to see her grandson, a writer, once more before she dies.

She tells her story as she dictates into a tape recorder, reminiscing and setting the record straight about her employers and a final confrontation that has made the house a legend. You might think you suspect her secret, but the ending is a whopper, and uses shorthand (Gregg was invented in 1888) as the device.

This is post-Victoria England – upstairs/downstairs British families, two world wars, money made and lost, secret lovers, and, of course, scandalous secrets – whispered in the scullery – an upscale soap opera – juicy and fun to read.

A dream come true – the aunt you never met has left you a fortune and a flat in London – with the condition that you live there for a year with your twin sister. Unfortunately, the place is haunted with the aunt hiding in a desk drawer,

Although not as confusing as her first novel, The Time Traveler’s Wife, Audrey Niffenegger’s Her Fearful Symmetry still has her flare for taking you somewhere you’ve never been – this time, a tale of sisterhood,  obsession, and mistaken-identity.

In exploring the symmetry of lives and loves, Niffenegger uses two twin sets – Edie and Elspeth and the daughters of one – Valentina and Julia. The younger twins seem to mirror the issues of the older generation, but all the characters are troubled – not just the young twins whose closeness threatens to prevent them from finding individual identities.   Martin, the brilliant crosswork-puzzle writer who lives upstairs, is a prisoner to his obsessive compulsive disorder, but sometimes seems more humorous than pathetic.   Robert, the lover, seems to lack the substance of a leading man, and his lack of will-power is sometimes more annoying than William’s quirks.

Set in Highgate Cemetery, the Victorian landmark on the English Historical Registry, with the graves of Karl Marx and George Eliot as the backdrop, the story blurs the boundaries of the residents of the apartment house just outside its gate and those inside.   As a bonus, Niffenegger provides an authentic tour of its Gothic tombs and buildings.

Elspeth’s manipulation of the characters, even after her death, is the force that pervades the story.   She’s left her secret in her diaries, bequeathed to Robert, but even after it is revealed, it seems inconsequential to what happens next.  Elspeth says “…A bad thing about dying is that I’ve started to feel as though I’m being erased.”   This is one lady who is not erased – you may wish she were.

The haunting is not as morally purposeful as The Lovely Bones, but carries some of the same attempts at explaining what happens after death.   In Her Fearful Symmetry, however, the impetus for haunting seems more selfish than problem-solving.

The book becomes more of a compulsive read than a satisfying one.  I found myself wanting to know what happened, but wishing it would end.

If you could change lives with someone else, would you? Even if the change means you could not go back to your old self?    Carol Goodman uses this twist on the changeling folktale as the premise for her latest novel, Arcadia Falls.     Reading a new Goodman novel is like going back to visit an old friend – like Anita Shreve, you know you will get a good story,  and with Goodman you expect to be comfortably wrapped in her allusions to literature, while she is seducing you with murder and Gothic mayhem.

Goodman gives a passing nod to Bruno Bettlehiem’s The Uses of Enchantment in the novel.   Bettleheim gave a Freudian perspective to the witches and monsters in fairy tales, and, for some students of literature – took away the magic – like having a poem explained or a painter’s strokes dissected.

But Carol Goodman is all magic – giving credibility to folktales and fairy tales by matching her story to one that you might have heard as a child.   Like all good fairy tales, there are monsters, maidens, and heroes – but Goodman’s characters live in the real world.   Using the Bettleheim premise that fairy tales need to be read and applied, Goodman creates an enticing Gothic tale – full of mysterious women-in-white in the mist, and murder in the glade.

Meg Rosenthal is starting a new job as a high school English teacher at Arcadia Falls, a private upper New York boarding school, after her husband has died and left her and her teenage daughter penniless.   As with her other novels, Goodman links the setting to the main character’s academic research.   In this case, Meg is an expert in folklore and the history of Arcadia Falls connects to her work.

As the story unfolds, the changeling motif becomes the focus – connecting the fairy tale of the changeling to the changing lives of Meg and her daughter in a new place – a chance to reinvent themselves.   Before long, the story evolves into investigations of murder and true identities.    The teenage girls and the mother-daughter relationships that become central to the action will sometimes make you smile – sometimes make you shudder – in their realistic depictions that may be more Greek tragedy than Freud.

Goodman will take you to the precipice of fright (literally) more than once, but, in the end, she knows how to wrap it all up – neatly and satisfactorily – maybe a little contrived – but you can forgive that – happy endings are a relief after so much anxious uncertainty.