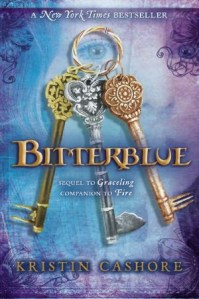 After recently watching the Queen of England parachute into the opening ceremonies of the Olympic Games with the king of spies, the fantasy of queens and adventure seems closer to reality.  In Kristin Cashore’s Bitterblue, young Queen Bitterblue goes undercover at night to explore the underbelly of her kingdom, looking for connections to her people, and the reasons for their unrest.  Of course, she meets a handsome leader of the resistance who reveals uncomfortable truths.

Although I have not read the first two books in the trilogy, Cashore’s interview in the New York Times –By the Book – prompted me to find her most recent contribution to young adult fantasy – Bitterblue, the third book in the Graceling trilogy.  Queen Bitterblue rules over the realm of Monsea in the Seven Kingdoms, where some are born with a “Grace,” a superhuman skill that can take any form, from super strength convenient for a bodyguard, to extraordinary memory, good for the librarian/archivist, or telling mind-altering lies that people believe, like the former King.  The “grace” may be also be as simple as baking good bread.

Cashore weaves the story with adventure and fills in the backstory for those who have not read the first two books.  The plot has a young queen trying to overcome the horror her father left behind in the abused kingdom, while trying to decide whom she can trust.  Her romance with the rebel leader provides some angst when he discovers who she really is, but the ciphered messages in the embroidery and books offer her as much challenge as learning how to wield a sword.

A fun young adult fantasy… I never did solve what Bitterblue’s “grace” is – maybe it’s becoming the fair and noble queen.